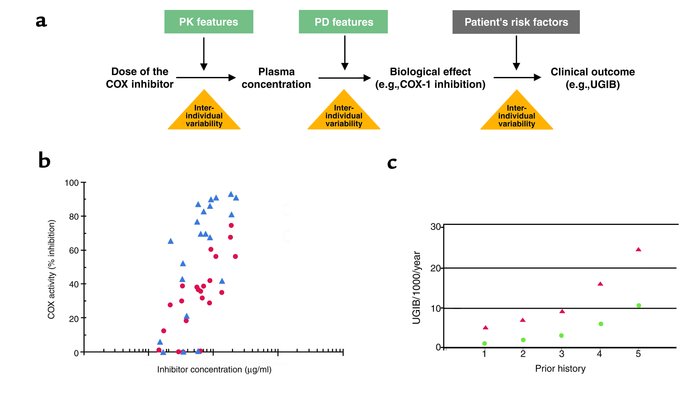 Determinants and sources of variability in GI complications of COX-inhibitory drugs. () Major determinants of the likelihood of an upper GI bleeding (UGIB) complication resulting from administration of a COX inhibitor include pharmacokinetic (PK) and pharmacodynamic (PD) variables, as well as the interaction of the drug with pre-existing risk factors for UGIB. PK features, such as half-life of the drug, and PD features, such as its selectivity for the COX-2 isoform, are intrinsic to the COX inhibitor. The presence or absence of risk factors for UGIB will clearly vary between patients. Significant interindividual variability arises from several sources, as shown in and , and is superimposed on each of these effects. Modified from ref. . () In addition to the variable plasma levels achieved after oral dosing of a COX inhibitor, the inhibition of the platelet COX-1 isozyme (circles) and the monocyte COX-2 isozyme (triangles) in response to any given plasma level of the inhibitor is highly variable between subjects. COX-isozyme inhibition, measured ex vivo, is plotted as a function of plasma meloxicam levels in individual subjects. Modified from ref. . () The variable excess of UGIB induced by NSAIDs as a function of the increasing severity of prior history: 1, none; 2, dyspepsia; 3, gastritis; 4, uncomplicated ulcer; 5, complicated ulcer. Within each cohort of subjects, UGIB rates for individuals currently using NSAIDs (triangles) exceed those for non-users (circles), but the effect of prior history greatly amplifies that of NSAID use (data from ref. ).