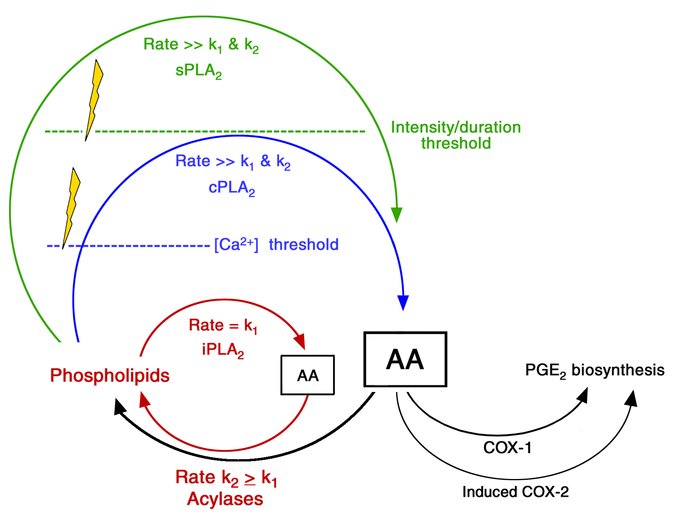 Stages of eicosanoid biosynthesis. Under basal conditions, release and metabolism of arachidonic acid (AA) are balanced, leaving little AA available as a substrate for COXs, so little prostaglandin E2 is formed. With the breaching (lightning bolts) of two successive metabolic thresholds, two additional phospholipases are activated, permitting the accumulation of AA and the formation of its downstream metabolites. Prior to stimulation, the cycle shown in red predominates, wherein membrane phospholipids are hydrolyzed by the phospholipase A2 isoform iPLA2, yielding low quantities of AA that are recycled by the action of acylases to reform membrane phospholipid. However, following growth factor receptor activation, Ca2+ levels rise and the inducible phospholipase cPLA2 (shown in blue) begins to generate sufficient AA that COX-1 and, later, COX-2 become active. COX-1 activity is coupled to a cytosolic form of the PGH-PGE isomerase, whereas COX-2 is coupled to a membrane-bound form of the enzyme. Following prolonged receptor occupancy and activation, yet another phospholipase, sPLA2 (shown in green), is induced. This enzyme is secreted and can therefore activate prostaglandin synthesis in neighboring cells by a paracrine mechanism.