Ventriculomegaly and hydrocephalus are associated with loss of function of glycine decarboxylase (Gldc) in mice and in humans suffering from non-ketotic hyperglycinemia (NKH), a neurometabolic disorder characterized by accumulation of excess glycine. Here, we showed that ventriculomegaly in Gldc-deficient mice is preceded by stenosis of the Sylvian aqueduct and malformation or absence of the subcommissural organ and pineal gland. Gldc functions in the glycine cleavage system, a mitochondrial component of folate metabolism, whose malfunction results in accumulation of glycine and diminished supply of glycine-derived 1-carbon units to the folate cycle. We showed that inadequate 1-carbon supply, as opposed to excess glycine, is the cause of hydrocephalus associated with loss of function of the glycine cleavage system. Maternal supplementation with formate prevented both ventriculomegaly, as assessed at prenatal stages, and postnatal development of hydrocephalus in Gldc-deficient mice. Furthermore, ventriculomegaly was rescued by genetic ablation of 5,10-methylene tetrahydrofolate reductase (Mthfr), which results in retention of 1-carbon groups in the folate cycle at the expense of transfer to the methylation cycle. In conclusion, a defect in folate metabolism can lead to prenatal aqueduct stenosis and resultant hydrocephalus. These defects are preventable by maternal supplementation with formate, which acts as a 1-carbon donor. 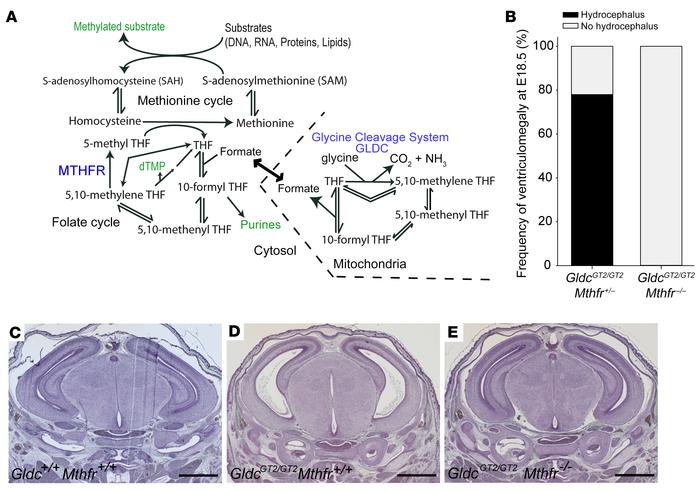 () Outline of folate and methionine cycles, with key outputs in green text and relevant enzymes in blue text. Lack of Mthfr activity prevents transfer of 1-carbon units from 5,10-methylene THF to the methionine cycle via 5-methyl THF. () Among offspring of intercrosses, ventriculomegaly was not detected at E18.5 in fetuses ( = 5), but occurred at high frequency among fetuses that were heterozygous ( = 7) or wild type ( =2) for ( < 0.025 by Fisher’s exact test). (–) Sections of E15.5 wild-type (), (), and () brains showing that absence of Mthfr restores the wild-type appearance of the pineal gland, subcommissural organ, and aqueduct, and prevents ventriculomegaly, in -null fetuses. Scale bars: 1 mm.