Paroxysmal nocturnal hemoglobinuria (PNH) is an acquired disorder characterized by hemolysis, thrombosis, and bone marrow failure caused by defective expression of glycosylphosphatidylinositol-anchored (GPI-anchored) complement inhibitors. Most commonly, PNH is caused by loss of function of PIGA, which is required for GPI biosynthesis. In this issue of the JCI, Höchsmann et al. report on 4 PNH patients who also had marked autoinflammatory manifestations, including aseptic meningitis. All 4 patients had a germline mutation of the related gene PIGT and a somatically acquired myeloid common deleted region (CDR) on chromosome 20q that deleted the second PIGT allele. The biochemistry and clinical manifestations indicate that these patients have subtle but important differences from those with PNH resulting from PIGA mutations, suggesting PIGT-PNH may be a distinct clinical entity.

Molecular and cellular differences between PIGA- and PIGT-PNH. 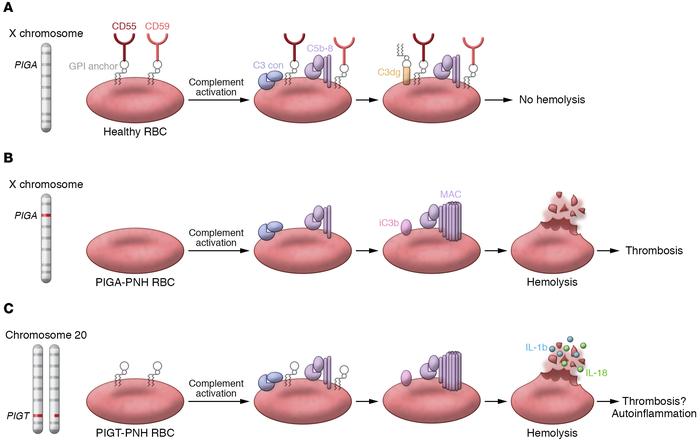 () In healthy subjects, GPI-anchored protein biosynthesis proceeds unperturbed in the endoplasmic reticulum. The full-length GPI anchor with attached protein (e.g., CD55 and CD59) resides in the membrane rafts of blood cells; thus red cells are protected from complement-mediated hemolysis. () In PIGA-PNH, a somatic mutation in (required for the initial step in GPI-anchored biosynthesis) leads to failure to generate the GPI anchor in hematopoietic cells. After expansion of the PNH clone (often through immunologic escape) the PNH red cells are susceptible to complement-mediated hemolysis due to an absence of the GPI-anchored CD55 and CD59 from the cell surface. () In PIGT-PNH, the GPI anchor is made in the endoplasmic reticulum (ER), but since PIGT is responsible for transpeptidation of proteins (e.g., CD55 and CD59) to the fully formed GPI molecule, red cells from these patients are susceptible to complement-mediated hemolysis similar to PIGA-PNH. Since is autosomal, two hits to different alleles are required to produce this phenotype. The PIGT-PNH patients have one allele with a germline mutation and one allele with deletion of 20q, which contains . Since 20q also contains putative tumor suppressor genes and Höchsmann et al. hypothesize that the mechanism of clonal dominance of PIGT-PNH is different from that of PIGA-PNH. Another key difference between these patients is the presence of autoinflammatory symptoms that appear to be a consequence of having free GPI in the plasma membrane.