Find articles by Feldman, A. in: JCI | PubMed | Google Scholar |

Clinician investigators and biomedical scientists share a fundamental obligation to produce new knowledge that can lead to better treatments or cures for human disease. Conflicts of interest (COIs) occur when professional responsibilities and altruistic goals are influenced by an outside interest that biases clinical judgement or interpretation of data. The public exposure of a failure to disclose COIs in clinical or translational research can lead to a loss of confidence in the medical profession and in scientific discovery, respectively. The Sunshine Act was seen as mitigating the lack of transparency in COI reporting by requiring the pharmaceutical and device industries to disclose all payments to physicians and teaching hospitals through the Open Payment program, a public and searchable database of industry payments. This database has certainly helped, but problems persist, as illustrated by front-page articles in the New York Times describing how undeclared COIs have roiled two major areas of medical research.

The first New York Times reports detailed the failure of a top cancer researcher and senior administrator at Memorial Sloan Kettering Cancer Center to disclose over $3.0 million in compensation from industry (1). A follow-up report noted that this high level of remuneration was not unusual for influential physicians who serve on industry advisory boards (2). The second series of articles focused on a former Harvard physician-scientist and stem cell biologist who had failed to disclose his association with a biotechnology company (3). After a five-year review, Harvard Medical School and Brigham and Women’s Hospital (HMS-BWH) called for the retraction of 31 of his studies due, not to COIs, but to serious concerns regarding the integrity of data showing, in part, that c-kit+ stem cells could regenerate damaged heart (4). These two very different but equally high-profile events provide useful case studies of the adverse consequences that COIs can have on the integrity of research and can help guide development of improved reporting and oversight structures.

First, the Memorial Sloan Kettering case points out how academic institutions and professional associations often turn a blind eye to tracking and quantifying COIs, particularly when the conflict is held by a senior leader or a well-funded investigator. A failure to look for COIs and to appropriately regulate them is all too common across many professional societies. For example, the published policies of the National Comprehensive Cancer Network (NCCN) stipulate that authors of NCCN clinical guidelines may not have financial conflicts with the pharmaceutical industry that exceed a single payment of $20,000/year or aggregate payments of greater than $50,000/year (5). A recent study found, however, that 86% of guideline authors had at least one conflict and that eight of 125 authors had received payments over the benchmark levels (6). Societies have also failed to establish useful regulations for members of guideline committees. For example, the NCCN precludes members of guideline-writing committees from voting when they have a COI, but allows the conflicted members to stay in the room during those discussions at the discretion of the chair (5). In some cases, the conflicted panel members are even allowed to participate in the discussion. The NCCN guideline committees also need only have 51% of its members to be free of conflicts, raising the concern that a panel in which nearly half its members are conflicted would be hard-pressed to avoid bias.

The Harvard/Brigham and Women’s Hospital case demonstrates a second limitation of the Open Payment system — that it does not capture payments made to physician-scientists who do not maintain a medical license or to nonphysician investigators. Furthermore, companies that do not yet produce an FDA-approved product need not report payments to researchers. The Open Payment system also does not track the number of relevant patents that an investigator has filed with the US patent office, an important metric because it marks the intent of a faculty member to commercialize intellectual property at a later point in time. Thus, while current COI policies capture the “conflict” of a practitioner who attends a dinner sponsored by a pharmaceutical company, they fail to identify substantive conflicts among investigators who are leading clinical trials that might alter the care of patients.

A third flaw in COI policies at many academic institutions is a failure to properly oversee participation in clinical trials by investigators who have commercialized their intellectual property and, as a result, have equity in the study sponsor. An absence of oversight often leads to investigators participating in clinical studies that lack rigor in trial design, data collection, and/or are prone to overinterpretation of “encouraging” data buried in clinical endpoints that were not prespecified. In this regard, two recent reviews on the use of cardiac stem cells for regenerating heart muscle pointed out that recent stem cell trials were rife with COIs (7, 8). For example, studies published in high-impact journals by investigators having an equity interest in the sponsoring entity or in a collaborating or contributing company reported salutary benefits of cell therapy in clinical trials that enrolled fewer than 20 patients per treatment group (9–11), lacked concordance in critical baseline demographic data (10), did not include a control group (9, 12), and/or reported efficacy in the absence of a measured change in ventricular function (11). In fact, a randomized clinical trial that demonstrated a benefit of cardiac stem cells was subsequently retracted by the publisher because of questions regarding the validity of the data (13).

Finally, professional societies that support journals bear responsibility for making sure that the editors and reviewers are made aware of all author COIs before publishing consensus documents. This is illustrated by a 2017 consensus statement on cardiomyocyte regeneration. The authors concluded that bone marrow–derived “c-kit+ cells or mesenchymal stem cells may confer structural or functional benefits” (14). Half of the authors disclosed an equity interest in a related biotechnology company, one author failed to note that he had founded a stem cell company, and a second author did not disclose that he had filed multiple stem cell patents, information that might have given pause to the reviewers and the editors if it were known during the review process. 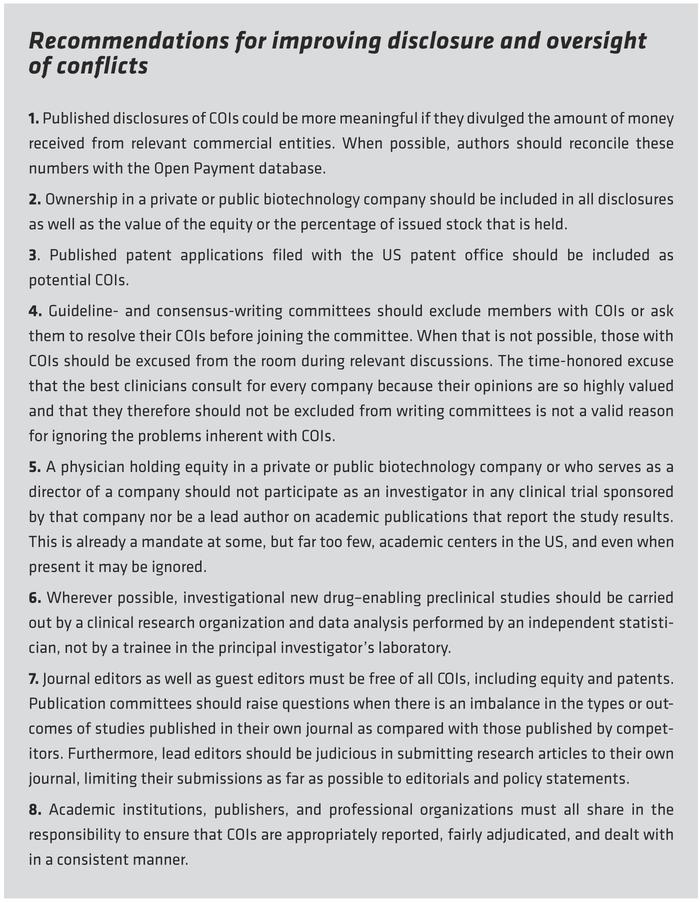 The growing number of reported COIs and our failure to properly manage them threatens the integrity of the scientific process insofar as it has the potential to bias scientific communications, which in turn will erode public trust in the scientific community. This statement notwithstanding, COI guidelines must not be so restrictive that they shackle academic freedom and stifle the entrepreneurial spirit of investigators. The scientific community must seek a transparent middle ground. The guidelines proposed herein may be viewed as too strident by some and too lenient by others, but they will hopefully serve as a starting point for national discussions with the goal of deriving new and innovative policies that are fair but also enforceable.

Conflict of interest: AMF is the scientific founder and has significant equity in and serves as a director of Renovacor Inc., which has in-licensed pending patents 15/115,807, 15/753,003, and 62/764,894 from Temple University. DLM is a member of the scientific advisory board of Tenya Therapeutics, for which he received an amount of compensation consistent with a potential conflict.