How does your fat affect your liver when you drink?

How does your fat affect your liver when you drink?

White adipose tissue (WAT) dysfunction is generally thought to promote the development of alcoholic liver disease (ALD) in alcoholics by releasing free fatty acids and inflammatory mediators. This explains, at least in part, the synergistic or additive effects of alcohol and obesity on liver disease progression. In this issue of the JCI, Shen et al. establish a previously unrecognized concept that brain alcohol sensing enhances thermogenesis of brown adipose tissue (BAT) through sympathetic nerve activation. BAT functions as hepatoprotective machinery to counteract the development of ALD, implying a therapeutic potential of BAT activity modulation for the treatment of ALD.

Role of adipose tissue in the pathogenesis of ALD. 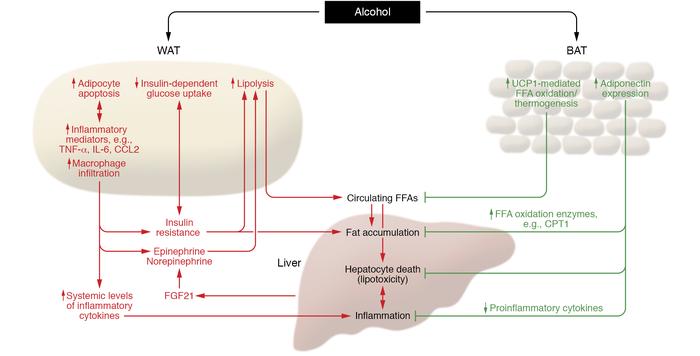