Despite advances in understanding systemic lupus erythematosus (SLE) pathogenesis, most clinical trials of new targeted therapies have been met with disappointment. The type I IFN pathway is believed to play an important role in SLE, and the proposed involvement of this pathway helps explain the frustration behind the failure at targeting either IFN-α or the type 1 IFN receptor itself. In this issue of the JCI, Furie et al. report on an intriguing phase 1b study that demonstrates an approach for inhibiting this pathway in the skin using an mAB (BIIB059) that targets the blood DC antigen 2 (BDCA-2) receptor on plasmacytoid DCs (pDCs). BIIB059 decreased IFN expression and improved cutaneous lupus disease activity, with a favorable safety profile. Whether or not this strategy will be effective in managing SLE in other organs remains unanswered. However, these results suggest that closing the door on targeting the type 1 IFN pathway in SLE may be premature and highlight the emerging question of whether an organ-specific approach toward lupus trials and treatment should be the wave of the future.

Sites of action of drugs that inhibit type 1 IFN. 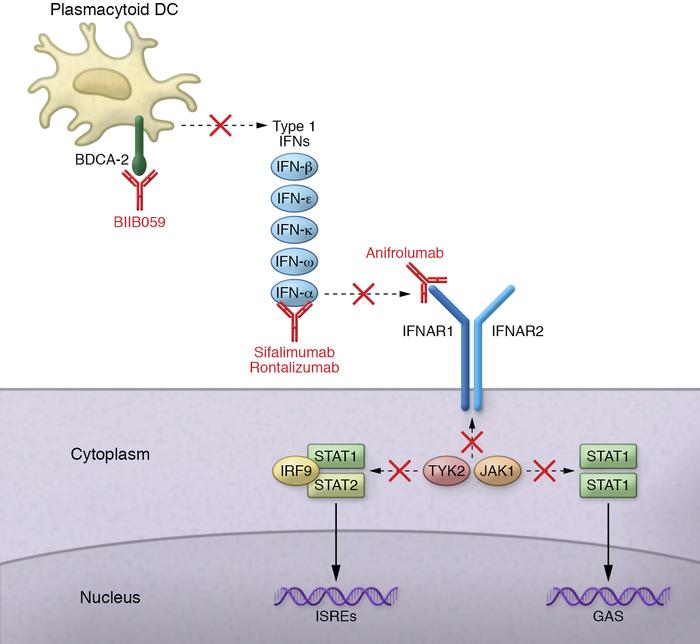 In this issue, Furie et al. demonstrate that BIIB059 is an mAb that works upstream of other type 1 IFN–interfering drugs. BIIB059 binds the BDCA-2 receptor on pDCs, leading to inhibition of type 1 IFN production. Sifalimumab and rontalizumab act as mAbs against IFN-α, blocking all and most IFN-α subtypes, respectively. Anifrolumab is an mAb against IFNAR, preventing interaction with tyrosine kinase 2 (TYK2) and JAK1 and thus inhibiting the ability of IFN-α and all other type 1 IFNs to mediate downstream effects. IRF9, IFN regulatory factor 9; ISRE, IFN-stimulated response element; GAS, IFN-γ–activated sequence.