The polyamine metabolic pathway has been considered a rational target for antineoplastic therapy since it was discovered that polyamines are absolute requirements for tumor initiation, growth, and, in some instances, survival. Although several promising preclinical studies have demonstrated the critical nature of polyamines for tumor growth, the clinical success of agents targeting polyamine metabolism have been lacking. In the accompanying article, Bianchi-Smiraglia et al. identify both a new target and new drug that inhibits polyamine biosynthesis, reduces intracellular polyamines, and inhibits the growth of several models of human multiple myeloma. These results are both intriguing and provide promise for moving such a strategy to the clinic.

The regulatory dance of ODC1 in polyamine metabolism. 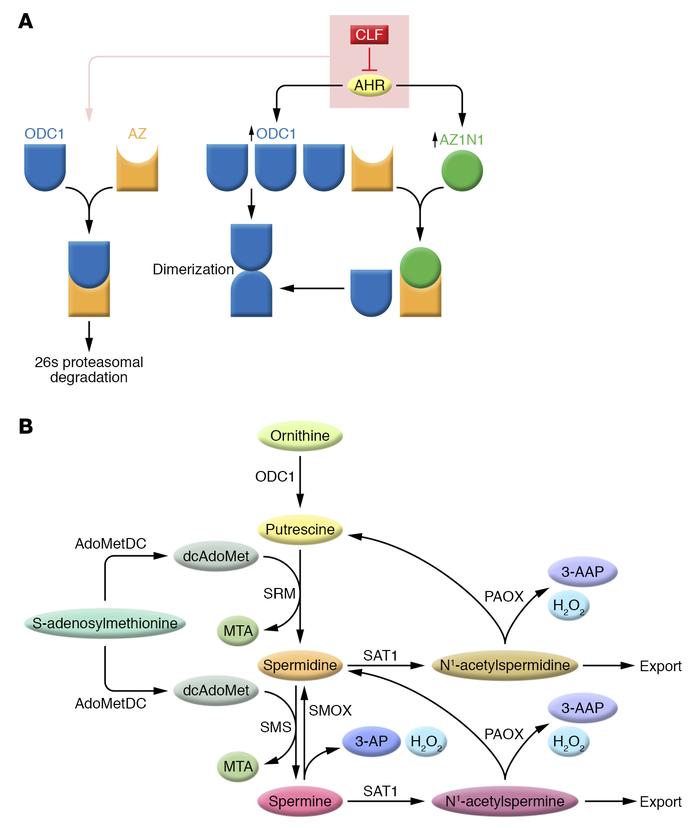 () AHR increases the transcription of and , leading to increased ODC1 and AZIN1 protein levels (blue and green, respectively). This results in increased levels of the active ODC1 dimers and a reduction of AZ-inactivated ODC1 (orange). CLF blocks the transcriptional activation of AHR, thus favoring ODC1-AZ interactions leading to ODC degradation and reduced polyamines. () In this simplified polyamine metabolic pathway, ODC1 is a rate-limiting step in polyamine biosynthesis and produces the diamine 1,4-diaminobutane (putrescine). Spermidine synthase (SRM) and spermine synthase (SMS) transfer an aminopropyl group from decarboxylated S-adenosylmethionine (dcAdoMet) produced by the decarboxylation of S-adenosylmethionine for the synthesis of spermidine and spermine, respectively, with methylthioadenosine (MTA) as a byproduct of both reactions. SAT1 catalyzes the transfer of the acetyl group of acetyl coenzyme A to either spermidine or spermine, which are either excreted from the cell or serve as substrates for N1-acetylpolyamine oxidase (PAOX), a peroxisomal enzyme. 3-acetylaminopropanal (3-AAP) and H2O2 are byproducts of oxidation of the acetylated polyamines by PAOX. SMOX is a cytosolic and nuclear amine oxidase that directly oxidizes spermine to produce spermidine. 3-aminopropanal (3-AP) and H2O2 are byproducts of the oxidation of spermine by SMOX. Data presented by Bianchi-Smiraglia et al. indicate that CLF treatment of multiple myeloma cells decreases ODC1 activity and may increase both SAT1 and SMOX activity, thus reducing intracellular polyamines. For a more complete overview of polyamine metabolism, see ref. .