Functional significance of the platelet immune receptors GPVI and CLEC-2

Functional significance of the platelet immune receptors GPVI and CLEC-2

Although platelets are best known for their role in hemostasis, they are also crucial in development, host defense, inflammation, and tissue repair. Many of these roles are regulated by the immune-like receptors glycoprotein VI (GPVI) and C-type lectin receptor 2 (CLEC-2), which signal through an immunoreceptor tyrosine–based activation motif (ITAM). GPVI is activated by collagen in the subendothelial matrix, by fibrin and fibrinogen in the thrombus, and by a remarkable number of other ligands. CLEC-2 is activated by the transmembrane protein podoplanin, which is found outside of the vasculature and is upregulated in development, inflammation, and cancer, but there is also evidence for additional ligands. In this Review, we discuss the physiological and pathological roles of CLEC-2 and GPVI and their potential as targets in thrombosis and thrombo-inflammatory disorders (i.e., disorders in which inflammation plays a critical role in the ensuing thrombosis) relative to current antiplatelet drugs. 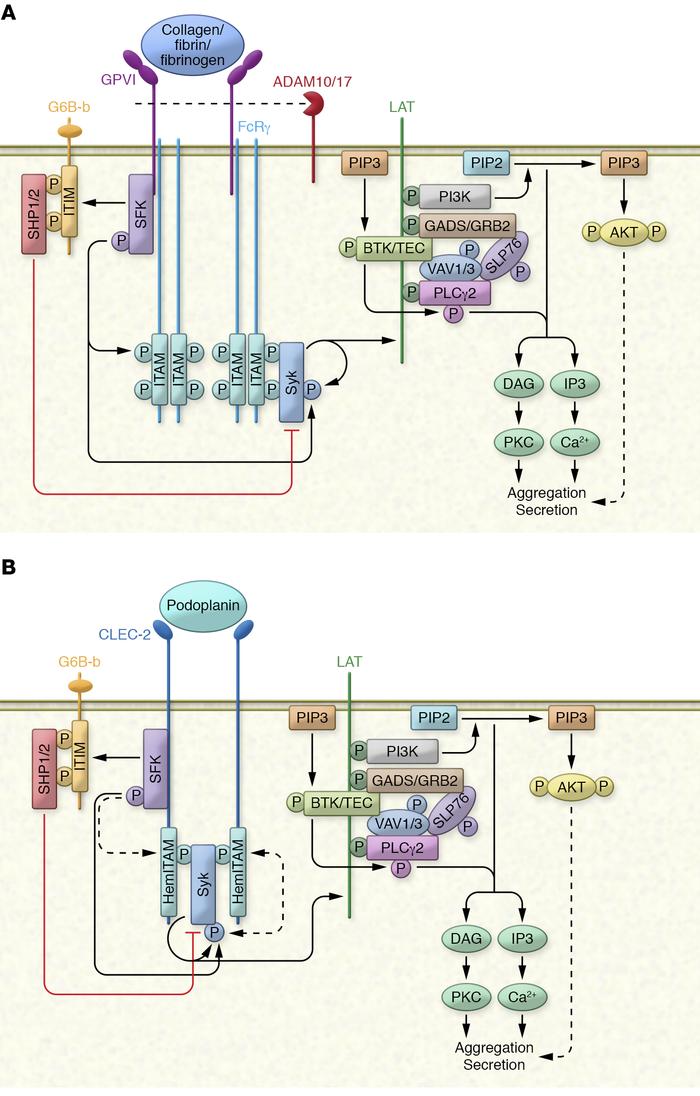 () GPVI activation initiates Src family kinase–mediated (SFK-mediated) phosphorylation of two conserved tyrosines in the associated FcRγ ITAM and allows the recruitment and docking of Syk’s SH2 domain. GPVI signaling is regulated through shedding by ADAM10/17, with G6B-b preventing shedding in circulating platelets via the tyrosine phosphatases SHP-1 and SHP-2. () CLEC-2 activation induces phosphorylation on the hem(ITAM), allowing binding of Syk. ( and ) Once recruited, Syk undergoes a series of auto- and trans-phosphorylations by SFK, leading to recruitment and phosphorylation of the adaptor protein LAT and recruitment of this pathway’s effectors, such as GRB2, GADS, SLP76, VAV1/3, PIP3, and BTK/TEC. The signaling cascade culminates in the phosphorylation and activation of PLCγ2, which binds to phosphorylated LAT and PIP3 on the plasma membrane. PIP3 also recruits BTK and TEC, which phosphorylate PLCγ2. Activation of PLCγ2 induces formation of the secondary messengers inositol 1,4,5-trisphosphate (IP3) and 1,2-diacylglycerol (DAG), resulting in the mobilization of intracellular Ca2+ stores and activation of PKC, respectively. These changes result in the secretion of intracellular α-granules and dense granules and inside-out activation of platelet integrins, including αIIbβ3, leading to platelet aggregation. CLEC-2 signaling in human platelets depends on actin polymerization and the secondary mediators, ADP and TxA2.