Aside from its catalytic function in protein synthesis, leucyl-tRNA synthetase (LRS) has a nontranslational function in regulating cell growth via the mammalian target of rapamycin (mTOR) complex 1 (mTORC1) pathway by sensing amino acid availability. mTOR also regulates skeletal myogenesis, but the signaling mechanism is distinct from that in cell growth regulation. A role of LRS in myogenesis has not been reported. Here we report that LRS negatively regulated myoblast differentiation in vitro. This function of LRS was independent of its regulation of protein synthesis, and it required leucine-binding but not tRNA charging activity of LRS. Local knock down of LRS accelerated muscle regeneration in a mouse injury model, and so did the knock down of Rag or Raptor. Further in vitro studies established a Rag-mTORC1 pathway, which inhibits the IRS1-PI3K-Akt pathway, to be the mediator of the nontranslational function of LRS in myogenesis. BC-LI-0186, an inhibitor reported to disrupt LRS-Rag interaction, promoted robust muscle regeneration with enhanced functional recovery, and this effect was abolished by cotreatment with an Akt inhibitor. Taken together, our findings revealed what we believe is a novel function for LRS in controlling the homeostasis of myogenesis, and suggested a potential therapeutic strategy to target a noncanonical function of a housekeeping protein. 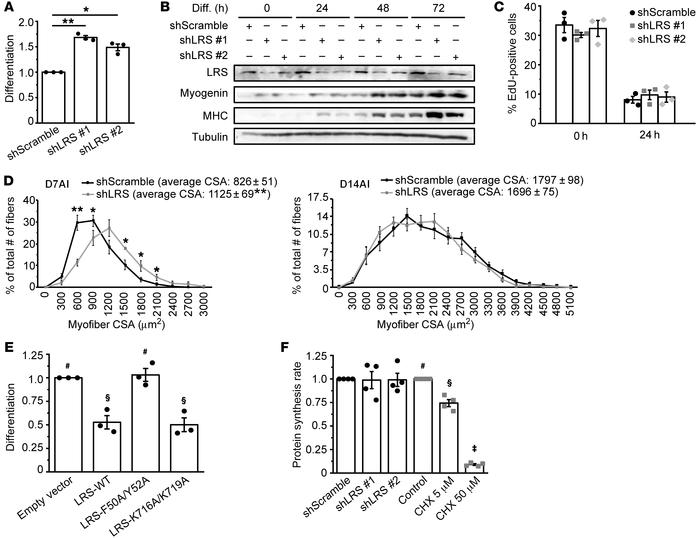