Current therapies for pulmonary arterial hypertension (PAH) provide symptomatic relief and improve prognosis but fall short of improving long-term survival. There is emerging evidence for a role of inflammatory mediators, primarily IL-6, in the pathogenesis of PAH. However, the mechanisms by which IL-6 potentially affects PAH are unknown. In this issue of the JCI, Tamura, Phan, and colleagues identified ectopic upregulation of the membrane-bound IL-6 receptor (IL6R), indicating classical IL-6 signaling in the smooth muscle layer of remodeled vessels in human and experimental PAH. They performed a series of in vitro and in vivo experiments that provide deeper insights into the mechanisms of classical IL-6 signaling and propose interventions directed against IL6R as a potential therapeutic strategy for PAH.

IL-6 classical and -signaling in PAH. 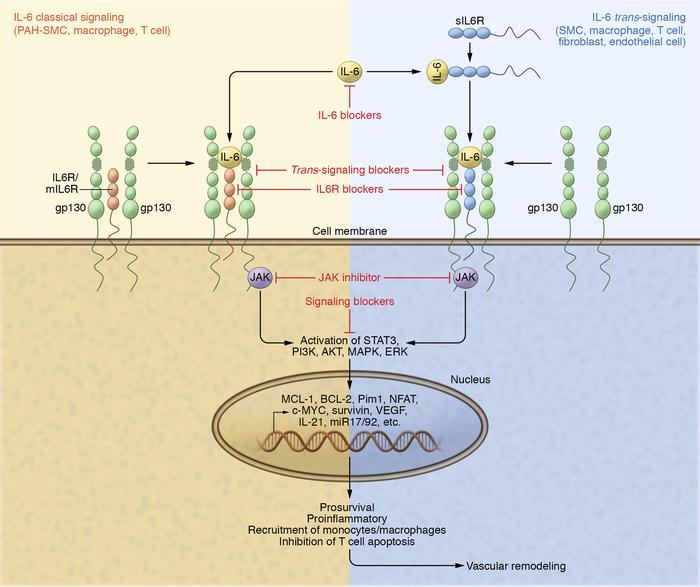 In classical signaling, IL-6 binds to its membrane-bound receptor (IL6R/mIL6R), inducing the formation of a heterohexameric complex containing two molecules each of IL-6, IL6R, and the IL-6 receptor subunit β (gp130). Formation of this complex results in activation of the JAK/STAT3 signaling pathway, leading to the transcription of STAT3 target genes. The IL-6/IL6R/gp130 complex can also activate other signaling pathways, such as PI3K/AKT and MARK/ERK. In -signaling, IL-6 binds to the soluble form of the IL-6 receptor (sIL6R) and forms a binary complex that can bind to any cell that expresses gp130 on its surface. Through these signaling pathways, IL-6 exerts its pro-survival and proinflammatory recruitment of mononuclear cells and inhibition of T cell apoptosis. Pulmonary IL-6 production is increased in PAH patients and is thought to reflect increased production by both inflammatory cells and vascular cells. IL6R is expressed in a limited number of cell types under normal physiological conditions, including mainly immune/inflammatory cells (e.g., macrophages and T lymphocytes), whereas IL6R is ectopically upregulated in pulmonary arterial smooth muscle cells (SMC) in PAH patients and models. Because gp130 is ubiquitously expressed, -signaling can occur upon IL-6 stimulation in all vascular and non-vascular cells. Therapeutic strategies for the blockade of different nodes of the IL-6 signaling pathway (shown in red) have been developed.