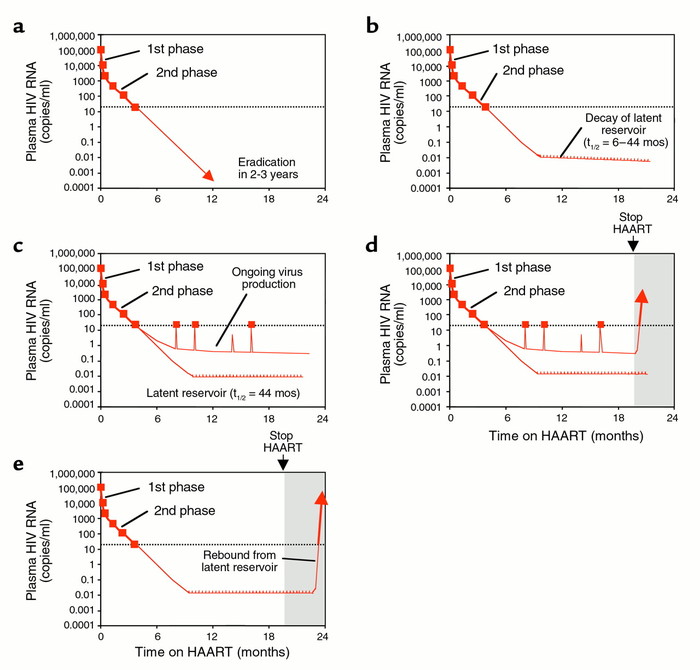 Hypothetical decay curves showing plasma virus levels in patients starting and stopping HAART. () Biphasic decay curve of plasma HIV-1 RNA levels following initiation of HAART (). Values below the limit of detection (20 copies/ml) are extrapolated and/or hypothetical. If HAART completely stopped ongoing viral replication, and if there were no stable reservoirs, eradication would be possible since the second phase of decay extrapolates to <1 residual infected cell in 2–3 years. () Decay curve showing additional effect of the latent reservoir in resting CD4+ T cells. If HAART stopped all residual viral replication, plasma viremia would decrease to the point where the only virus entering the plasma would be that derived from the occasional activation of latently infected resting CD4+ T cells. The decay rate of this latent reservoir is slow, with a half-life of at least 6 months in patients who have optimal suppression of viral replication on HAART (, ) and as long as 44 months in most patients on HAART (). () Viral decay curve expected in most patients on HAART. Virus production continues at a level below the limit of detection of current ultrasensitive assays. Many patients have occasional “blips” of viremia that reach into the detectable range. In these patients, the latent reservoir persists with an extremely long half-life (44 months). () Effect of treatment interruption. A rapid rebound is expected due to the fact that most patients have continued virus production while on HAART. Viruses that are produced at the time HAART is stopped will replicate rapidly. () Effect of treatment interruption in patients who have no residual viral replication on HAART. A rebound is still expected due to activation of cells in the latent reservoir.