Protective responses in the ischemic myocardium

Protective responses in the ischemic myocardium 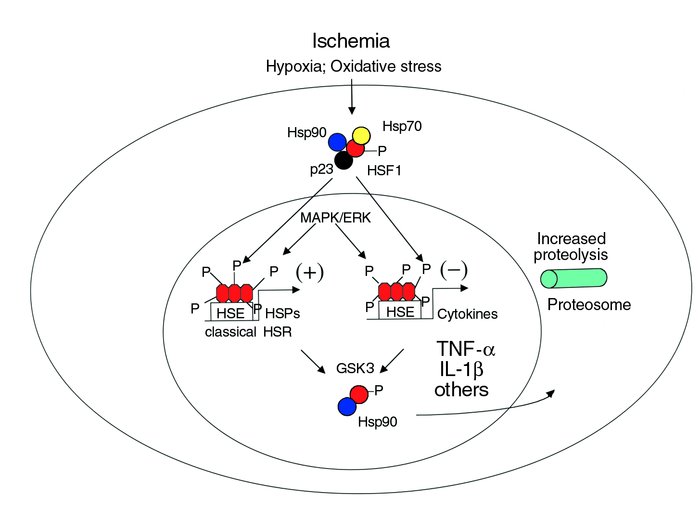 Heat shock transcription factor 1 (HSF1) has a central role in regulating transcription of genes important for cellular responses to ischemia and reperfusion. Under unstressed conditions, HSF1 is sequestered as an inactive monomer within a hetero-oligomeric complex containing Hsp90, Hsp70, FK506 binding protein 52, and p23 (). Stimuli arising as a consequence of ischemia and reperfusion, which include ROSs, disrupt this complex and promote formation of HSF homotrimers, which bind to promoter/enhancer sequences of target genes. DNA binding of HSF1 exerts positive or negative effects on transcription of different sets of target genes, by means of recruitment of coactivator or corepressor proteins. HSF1 transactivates genes encoding heat shock proteins (HSPs), including those identified as components of the classical heat shock response (HSR). Full activation of HSF1 requires its phosphorylation by nuclear MAPK or extracellular signal–related kinase proteins, whereas phosphorylation by glycogen synthase kinase 3 (GSK3) has negative regulatory effects by promoting release of HSF1 from DNA and attenuation of the HSR. A recently described and complementary function for HSF1 is to suppress expression of proinflammatory cytokines such as TNF-α and IL-1β in vitro and in vivo (). It has not been established whether the function of HSF1 as a negative regulator is restricted to specific cell types (e.g., blood-borne monocytes and macrophages). HSF1 is essential for activation of the protein chaperone defense stimulated by thermal stress () or by other conditions (e.g., inhibition of proteosome function) that increase the concentration of unfolded proteins within the cell (). HSE, heat shock element. P, phosphorylated amino acid residues.