Immune recognition of OxLDL in atherosclerosis

Immune recognition of OxLDL in atherosclerosis 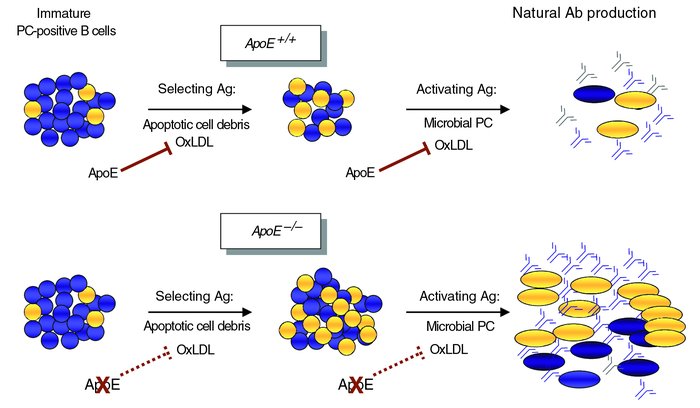 Potential role of OxLDL and ApoE in autoantibody production. Top: Under normal circumstances, the newly formed IgM+ B-cell population in the perinatal bone marrow or fetal liver can respond to millions of specific antigenic structures. Included in this population are anti-PC clones, some of which carry the T15 idiotype. In the selection step, PC epitopes on apoptotic material or OxLDL (selecting Ag) may enrich for T15/PC-specific B cells. The degree to which this occurs would be limited by the efficiency of debris-scavenging by macrophages or by the availability of ApoE. Additionally, these T15 clones may be stimulated to differentiate by the normally regulated amounts of PC or OxLDL (activating Ag). Bottom: In the absence of ApoE, accumulated OxLDL may promote a still more profound enrichment for T15 clones or may stimulate existing clones to differentiate into T15-producing (natural antibody–producing) plasma cells. Either possibility would give rise to the high levels of anti-OxLDL antibodies observed in the mice. Circles represent B cells; ovals represent mature antibody-secreting plasma cells. Blue, αPC; yellow, T15/PC.