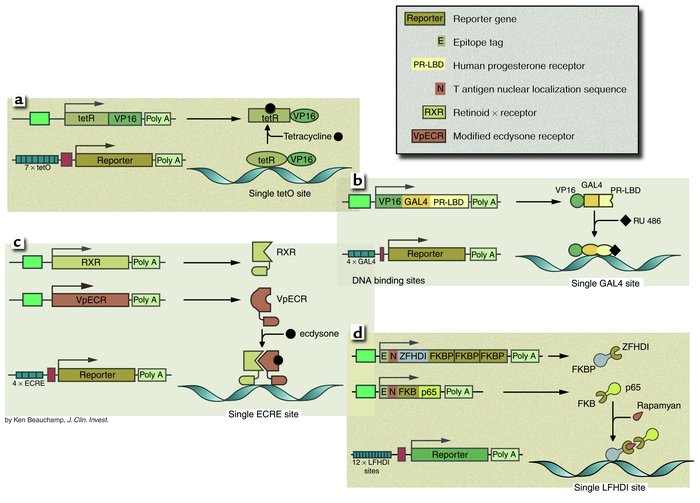 Chimeric regulatable systems have been designed to allow conditional expression of a reporter gene or a gene of therapeutic interest. In each of these systems, the transgene is transcriptionally silent until activated (or derepressed) by the addition (or removal) of a soluble hormone or drug. The drawing on the right side of each panel depicts the conditional binding of a transcription complex to one control element in an array of such elements (blue boxes) placed upstream of a minimal promoter or a TATA box (red boxes). () The tetracycline-regulatable system, the best studied of these systems, employs a chimeric, tetracycline-repressed transactivator (tTA; a fusion of tetR and truncated VP16 transactivator). In the absence of tetracycline, tTA binds with high affinity and specificity to a tetracycline-regulated promoter (tRP), a regulatory region comprising 7 repeats of tetO placed upstream of a minimal human CMV promoter. As described in the text, this system can be altered to allow for tetracycline-dependent, rather than tetracycline-repressible, transcription. () In the progesterone-regulatable system, the transactivator consists of VP16, the yeast GAL4 DNA-binding domain, and the ligand-binding domain of a mutant human progesterone receptor (PR-LBD). RU486 activates the transactivator by promoting the binding of the GAL4 DNA-binding domain to its consensus elements. () In the ecdysone-regulatable system, a heterodimeric complex of a modified ecdysone receptor component (VpECR— a fusion of VP16, the NH2-terminal truncation of a mutant ecdysone receptor and the DNA-binding domain of the glucocorticoid receptor) and the retinoid X receptor (RXR) is inactive until stimulated by its ligand, an insect hormone foreign to human tissues. In the presence of ecdysone or its synthetic analog muristerone, this functional ecdysone receptor complex binds to 4 repeats of a unique response element (ECRE) in the target promoter. () The rapamycin-regulatable system uses rapamycin or its analog to bring together the functional units of a bipartite transcription factor. The bipartite transcription factor consists of two chimeric human peptides composed of ZFHD1 (the DNA binding unit) and FKBP12, and truncated cellular protein FRAP and truncated NF-kB p65 protein. In the presence of rapamycin, the ZFHD1-FKBP protein binds to the FRAP-p65 chimera to form a complex that activates 12 ZFHD1 sites in the ZFHD1-dependent promoter. E is an epitope tag and N is the SV40 T antigen nuclear localization sequence.