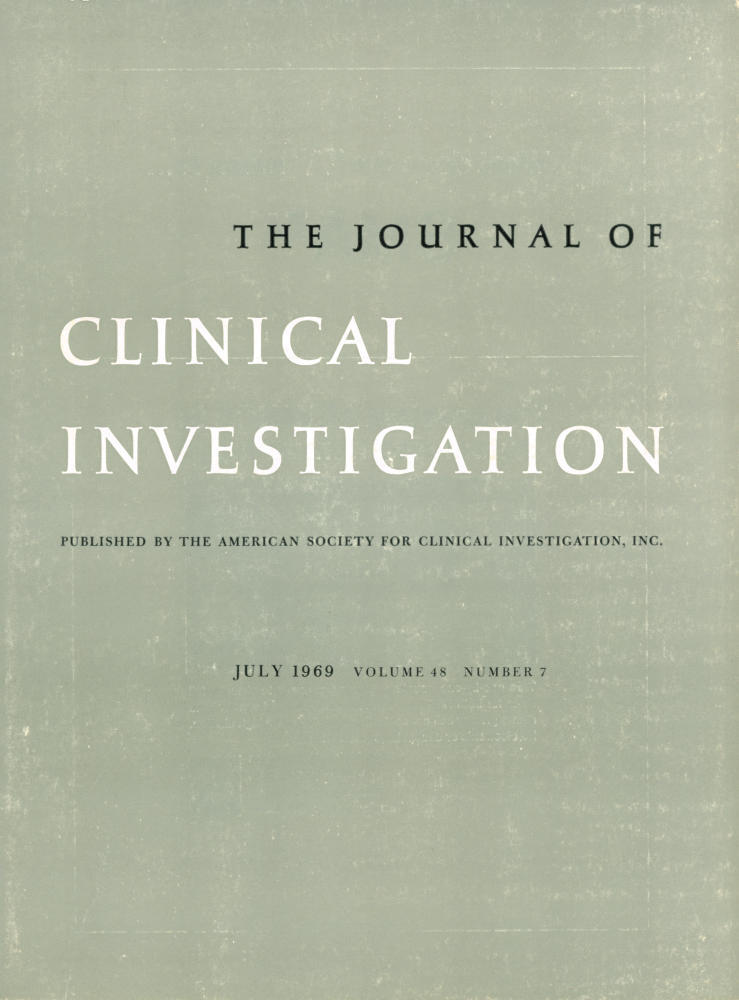 Expression of the rate of inactivation of isonicotinoyl hydrazide (INH) as a first-order constant gave better discrimination of slow and rapid inactivators than did the level of INH at the end of 6 hr. The most probable division point between the two classes was at k = 0.130.

Free fatty acid metabolism of the human heart at rest

Free fatty acid metabolism of the human heart at rest

Myocardial substrate metabolism was studied in 13 subjects at the time of diagnostic cardiac catheterization by means of palmitic acid-14C infusion with arterial and coronary sinus sampling. Two subjects were considered free of cardiac pathology and all, with one exception, demonstrated lactate extraction across the portion of heart under study. Data for this single lactate-producing subject were treated separately.

A low molecular weight β2-globulin (β2-microglobulin), albumin, and total protein were measured in concentrated 24-hr urine specimens from 20 healthy subjects and 30 patients with clinical proteinuria of glomerular or tubular type. Classification of proteinuria was made on the basis of clinical diagnosis and size distribution of urinary proteins after gel chromatography. The molecular radii (Stokes' radii) of β2-microglobulin and albumin, estimated by gel chromatography, were 15 A and 35 A.

A platelet and granulocyte membrane defect in paroxysmal nocturnal hemoglobinuria: usefulness for the detection of platelet antibodies

A platelet and granulocyte membrane defect in paroxysmal nocturnal hemoglobinuria: usefulness for the detection of platelet antibodies

The tendency of platelets and leukocytes to lyse after their interaction with antibody and complement was studied by measuring the release of 51Cr from cells labeled with this isotope. Platelets from six patients with paroxysmal nocturnal hemoglobinuria (PNH) were 15-230 times more sensitive to antibodies and 10-32 times more sensitive to complement than normal platelets or platelets from patients with other types of thrombocytopenic or hemolytic disorders. Mixed white blood cell (WBC) preparations from patients with PNH were 3-20 times more sensitive to anti-WBC antibodies and 5-10 times more sensitive to C′ than were WBC preparations from normal subjects, but PNH lymphocytes showed normal immunologic reactivity. PNH platelets, like PNH erythrocytes, lysed more readily than normal platelets in acidified serum and in media of reduced ionic strength, but these characteristics were not demonstrable with PNH WBC's under the conditions of study. In PNH, platelets appear to comprise a single population with respect to their sensitivity to immune lysis, yet their survival time as measured with 51Cr falls within normal limits. PNH granulocytes likewise appear to consist of a single, uniformly sensitive population.

A lipoprotein characterizing obstructive jaundice. I. Method for quantitative separation and identification of lipoproteins in jaundiced subjects

A lipoprotein characterizing obstructive jaundice. I. Method for quantitative separation and identification of lipoproteins in jaundiced subjects

Three immunochemically and electrophoretically distinct lipoproteins, LP-A, LP-B, and LP-X,1 were isolated from the low density lipoprotein fraction (1.006-1.063 g/ml) in plasma from patients with biliary obstruction by a separation procedure which combines ultracentrifugation, heparin precipitation, and ethanol fractionation. This method, here described, permits the quantitative determination of individual plasma lipoprotein families on the basis of their protein moieties, rather than on the basis of their lipid moieties or density.

Weanling rats were fed diets which contained either no protein or 27% protein. In one experiment after 23-35 days both groups were given l-leucine-4,5-3H either intragastrically or intraperitoneally and then sacrificed 24 hr later. In a second experiment animals were given these diets for 21 days and sacrificed 3, 6, or 12 hr after either intragastric or intraperitoneal administration of the labeled leucine. In both experiments the intestinal mucosa of proximal and distal segments of the small intestine was scraped, weighed, the protein concentration measured, and the specific activty of the mucosal protein was determined.

The effect of stimulating and suppressive influences on plasma aldosterone in normal man and in patients with primary aldosteronism were studied using a sensitive double-isotope derivative assay for aldosterone.

Extracellular volume expansion (ECVE) was produced, by normal saline infusion, in five normal and six thyroparathyroidectomized anesthetized dogs while glomerular filtration rate was reduced by the inflation of an intra-aortic balloon located above the renal arteries. The effect of ECVE on the maximum renal tubular reabsorptive capacity of phosphate (phosphate Tm) was also evaluated in five additional dogs. During ECVE, phosphate excretion increased both in normal and thyroparathyroidectomized dogs, and a direct and significant correlation was found between the fractional excretion of phosphate and sodium. Despite a substantial decrease in filtered phosphate which is produced by the acute reduction in glomerular filtration rate, phosphate excretion, during ECVE, exceeded control values. ECVE was associated with a reduction in phosphate Tm. The results demonstrate that ECVE increases phosphate excretion independent of changes in glomerular filtration rate and parathyroid gland activity. The data indicate that ECVE produced by saline infusion decreases the renal tubular reabsorption of phosphate.

Tissue composition and in vivo tissue protein synthesis were altered by acute uremia, induced in rats by bilateral nephrectomy. Net protein synthesis (anabolism minus catabolism) was increased in liver and heart and decreased in skeletal muscle, as judged from changes in total organ weight, ratios of protein: DNA and RNA: DNA, and leucine-14C incorporation into trichloroacetic acid (TCA)-insoluble, nucleic acid-free material. Concentration of free lysine, a major constituent of histones and ribonucleoproteins, also was increased in liver and decreased in skeletal muscle, a finding suggesting lysine shifted from muscle to liver in association with the changes in protein synthesis. Acute uremia also altered tissue levels of other amino acids. Hepatic concentrations and liver:blood concentration ratios tended to be increased for the essential, but not for the nonessential amino acids. Moreover, the phenylalanine:tyrosine concentration ratio, which reflects activity of the enzyme phenylalanine hydroxylase, was increased in blood, muscle, and liver. These findings indicate uremia selectively alters tissue composition and protein synthesis in different organs and may modify intermediary metabolism of some individual amino acids.

Acid-base relations in epithelium of turtle bladder: site of active step in acidification and role of metabolic CO2

Acid-base relations in epithelium of turtle bladder: site of active step in acidification and role of metabolic CO2

The acid-base relations across the two surfaces of the epithelium of the turtle bladder were examined. By means of the 5,5-dimethyl-2,4-oxazolidinedione (DMO) technique the intracellular OH- concentration was measured in the presence and absence of a transepithelial pH gradient.

Characteristics of RNA degradation in the erythroid cell

Characteristics of RNA degradation in the erythroid cell

The role of the liver in the metabolism of vitamin D

The role of the liver in the metabolism of vitamin D

The metabolism of vitamin D3 has been studied after intravenous injection of 10 IU of [1,2-3H]-vitamin D3 to vitamin D-deficient rats. The disappearance of the radioactivity from the plasma follows a very peculiar pattern characterized by an early rapid disappearance followed by a rebound of radioactivity before assuming still a third rather slow disappearance rate. The “rebound” phenomenon is concomitant with a rapid release of the radioactivity from the liver and is accounted for by the appearance of 25-hydroxycholecalciferol and other metabolites in the blood. It is postulated that the liver is the major site of transformation of vitamin D3 into 25-hydroxycholecalciferol.

It was investigated whether or not the human blood group isoantibodies A and B could be induced by immunogenic stimuli via natural routes with a kind of antigenic substance to which all humans are commonly exposed, or if the appearance of these antibodies is independent of antigenic stimuli as has long been believed.

Human prothrombin metabolism in normal man and in hypocoagulable subjects

Human prothrombin metabolism in normal man and in hypocoagulable subjects

The metabolism of human prothrombin labeled with radioactive iodine was studied in seven normal subjects and four hemophilic patients. Results in the normal subjects were: plasma volume, 37.6±3.8 ml/kg; plasma prothrombin concentration, 303±40 U/ml (0.153±0.02 mg/ml); prothrombin half-life, 2.81±0.51 days; total plasma prothrombin pool, 5.72±0.62 mg/kg, representing 64.1±9.1% of total body prothrombin; fractional catabolic rate, 42.5±12.4% of the plasma pool per day; prothrombin synthesis rate, 2.43±0.76 mg/kg per day. Results in the hemophilic patients did not differ significantly from normal. Circulating products of prothrombin activation could not be demonstrated in normal individuals or hemophilic subjects. The data suggest that continuous physiologic activation of the blood coagulation mechanism plays only a small part, if any, in the normal catabolism of prothrombin.

Studies of arteriosclerosis in japanese and american men: I. Comparison of fatty acid composition of adipose tissue

Studies of arteriosclerosis in japanese and american men: I. Comparison of fatty acid composition of adipose tissue

The proportions of fatty acids in lipids of subcutaneous adipose tissue was compared in closely age-matched, urban men from two populations with a great difference in mortality from arteriosclerosis, namely in 50 Americans and 56 Japanese aged 15-65 yr who had died suddenly and unexpectedly. Specimens from both groups were analyzed side by side for fatty acids by gas-liquid chromatography. Compared with Japanese, Americans had significantly (P<0.01) higher proportions of lauric (+ 0.2%), myristic (+ 0.4%), palmitic (+ 1.4%), stearic (+ 2.2%), and oleic (+ 5.3%) and lesser of palmitoleic (- 1.8%), linoleic (-6.3%), and linolenic (-0.4%) acids. Japanese had higher proportions of longer chain polyunsaturated fatty acids. The distributions of fatty acids for the groups at ages 35-44 yr had significant differences. With age, Americans showed significant increases of palmitic and oleic acids and decreases of lauric, myristic, stearic, and linoleic acids; Japanese showed no correlations of proportions of fatty acids with age. The significant correlations between per cent standard body weight and fatty acids in Americans were positive for palmitic and negative for lauric and stearic acids, and in Japanese, negative for myristic acid. The patterns of interacid correlations were dissimilar for the groups. These patterns may be stable characteristics of these groups providing further insight into their fatty acid metabolism. The relationships with the fatty acid compositions of the American and Japanese diets are discussed.

Beta-receptor mechanisms in the superficial limb veins of the dog

Beta-receptor mechanisms in the superficial limb veins of the dog

The lateral saphenous vein of dogs was perfused at constant flow with autologous arterial blood, and perfusion and femoral vein pressures were monitored; changes in the difference between these pressures were due to changes in venomotor activity. Injection of isoproterenol into the perfusate caused the vein to dilate. The amount of dilatation depended on smooth muscle tension in the wall of the vein before injection. When this was minimal (after sympathectomy), isoproterenol had no effect. During venoconstriction produced by electrical stimulation of the lumbar sympathetic chain or by the infusion of venoconstrictor drugs, the dilating action of 0.1 mg of isoproterenol was measured. Expressed as a percentage of the initial constriction caused by sympathetic stimulation, 5-hydroxytryptamine, or 1 M potassium chloride, the extent of the dilatation was 86.7±4.3 (SE of mean), 79.7±4.2, and 87.7±3.2, respectively. With norepinephrine and epinephrine infusions, the isoproterenol dilatations were less (65.1±9.0 and 55.2±7.2, respectively), consistent with the stimulant action of these agents on both alpha and beta receptors; such action was confirmed by comparing the responses to nerve stimulation and infusions of norepinephrine and epinephrine before and after betareceptor blockade. The venoconstriction caused by sympathetic stimulation and by infusions of norepinephrine and epinephrine was greatly enhanced by cooling the vein (decreasing perfusate temperature), but the dilating action of isoproterenol appeared to be insensitive to changes in temperature. The data suggest that beta receptors are specific entities and, when maximally stimulated, are capable of causing a venous relaxation that is proportional to the initial degree of tension in the vein wall.

The influence of sodium concentration and osmolality on net water and monovalent electrolyte absorption from or secretion into the intact human colon was studied in healthy volunteers.