Nonalcoholic steatohepatitis (NASH) is the most common liver disease in industrialized countries. NASH is a progressive disease that can lead to cirrhosis, cancer, and death, and there are currently no approved therapies. The development of NASH in animal models requires intact TLR9, but how the TLR9 pathway is activated in NASH is not clear. Our objectives in this study were to identify NASH-associated ligands for TLR9, establish the cellular requirement for TLR9, and evaluate the role of obesity-induced changes in TLR9 pathway activation. We demonstrated that plasma from mice and patients with NASH contains high levels of mitochondrial DNA (mtDNA) and intact mitochondria and has the ability to activate TLR9. Most of the plasma mtDNA was contained in microparticles (MPs) of hepatocyte origin, and removal of these MPs from plasma resulted in a substantial decrease in TLR9 activation capacity. In mice, NASH development in response to a high-fat diet required TLR9 on lysozyme-expressing cells, and a clinically applicable TLR9 antagonist blocked the development of NASH when given prophylactically and therapeutically. These data demonstrate that activation of the TLR9 pathway provides a link between the key metabolic and inflammatory phenotypes in NASH.

Is adipose tissue inflammation a prerequisite for the development of Non-alcoholic steatohepatitis?

Sir, we read with interest the article by Garcia-Martinez regarding the role of hepatocyte mitochondrial DNA on TLR-9 activation in Non-alcoholic steatohepatitis (1). The authors demonstrated that plasma of mice and humans with steatohepatitis contained high levels of mitochondrial DNA that activated TLR-9 in culture studies. They showed that most of the plasma mtDNA was contained in microparticles (MPs) of hepatocyte origin, and removal of these MPs from plasma resulted in a substantial decrease in TLR9 activation capacity. They then showed that TLR9 activation on lysosomal cells is required and that blocking of this receptor either pharmacologically or genetically improved the NASH phenotype in mice. Although this elegant study strongly suggests a role for TLR9 activation we would like to challenge the authors regarding the source of mtDNA in the pathogenesis of NAFLD.

Recently Stanton and coworkers showed in mice fed a high-fat diet (HFD) that macrophage activation and pro-inflammatory gene expression preceded the development of inflammation in the liver. In that study messenger RNA levels of macrophage and inflammation-associated genes were up-regulated strongly in adipose tissue by week 6 but only developed in liver tissue after week 16 (2). Chemokine (C-C motif) ligand (CCL)2 knock-out mice, which have a reduced capacity to attract macrophages to adipose tissue, developed less hepatic steatosis and insulin resistance suggesting that adipose tissue inflammation is a prerequisite for the development of NASH (3). Furthermore surgical removal of inflamed epididymal tissue in a HFD-induced steatohepatitis model attenuated liver inflammation (4). Recently Moyan and coworkers (5)  and our group (6) showed, using microarray analysis of liver tissue, that inflammatory pathways are not differentially expressed in early NASH but instead showed that pathways associated with fatty acid metabolism and PPAR are upregulated. Our group also showed, using microarray analysis of adipose tissue in bariatric patients stratified according to liver histology, that in the absence of inflammation in adipose tissue that no inflammatory pathways could be detected transcriptionally in the liver. We found that as patients progressed from NAFL to NASH and fibrosis that the number of inflammatory genes differentially expressed in adipose tissue increased that correlated with an influx of CD11c+CD206+ and CCR2+macrophages into this site (Figure 1). Collectively our data, and data obtained in mouse models suggest that adipose tissue inflammation precedes liver inflammation so that it is more than plausible that microparticles /mtDNA first originate from adipose tissue and only later from hepatocytes during the development of NASH. 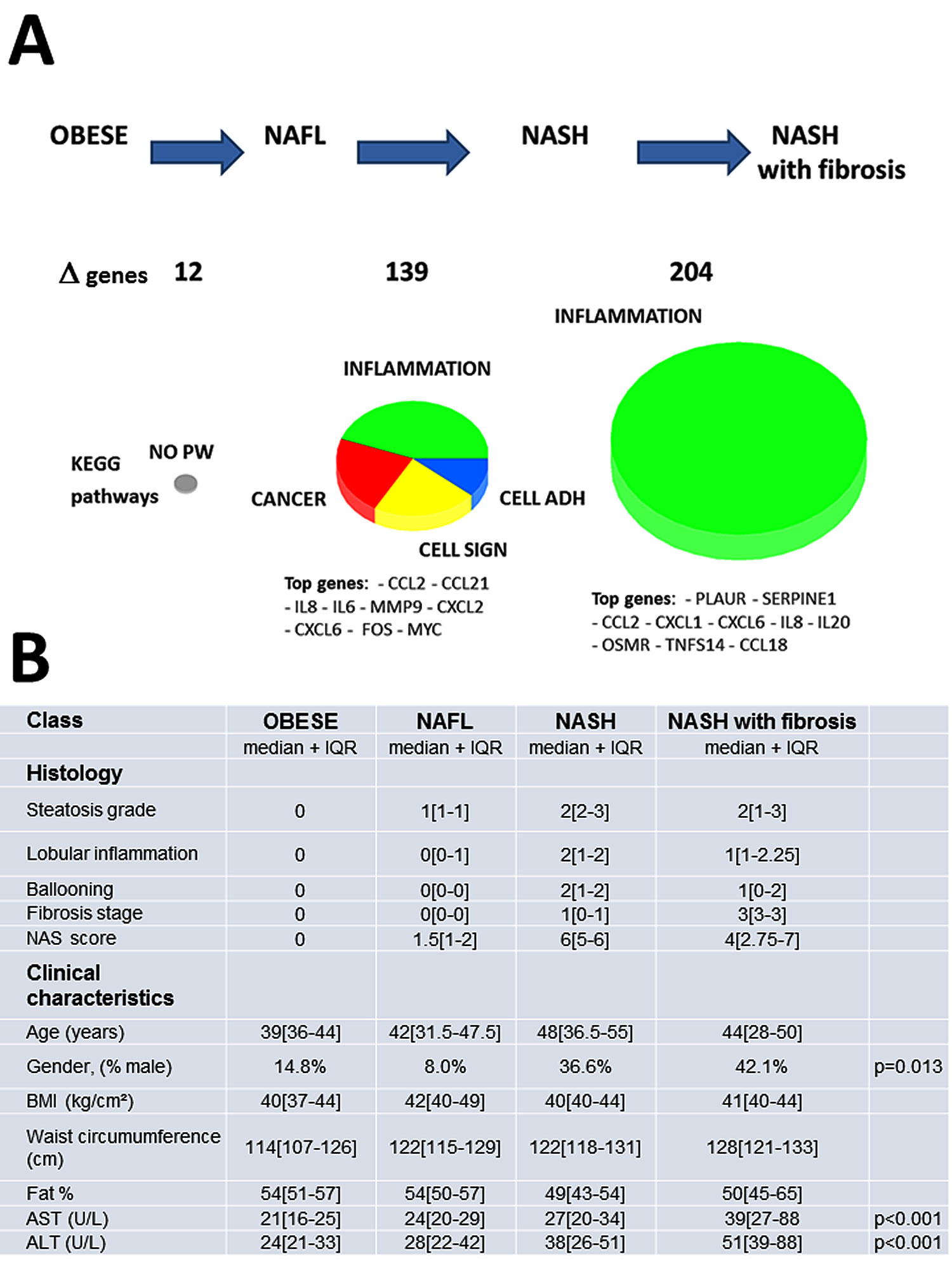 We would like to thank van der Merwe and colleagues for their critical reading of our manuscript. We have demonstrated the existence of a plasma microparticle (MP) mediated inflammatory pathway, which originates in hepatocytes and results in activation of the innate immune system via a DAMP (mitochondrial DNA), and its receptor (TLR9). The origin of the MP was confirmed by identification of a hepatocyte plasma membrane protein (arginase 1). This is a valid assay and does not have any technical issues that may bring the result into question. The ability of hepatocyte death to release DAMPs and induce local and systemic inflammation is not controversial, and as such we feel our proposition that hepatocyte DAMPs results in systemic (including adipose) inflammation has broad theoretical and experimental support (1). The large size of the liver, high blood flow, and discontinuous endothelium are all features that would promote the entry of hepatocyte MP into the circulation. The presence of the hepatocyte protein arginase 1 in the MP pool however does not rule out the possibility that adipocytes can also be contributing DAMP containing MP to this pool, although to date we do not know of any data demonstrating MP of adipocyte origin in the circulation.

We have not argued that the above pathway is the sole driver of inflammation in the metabolic syndrome. Chronic overnutrition clearly places a metabolic stress on adipocytes, as it does on hepatocytes, and can result in cell death and stimulation of a local inflammatory response. We would however argue that plasma TLR9 ligand activity from hepatocytes in NASH will provide an additional pro-stimulatory signal. The relative contribution, and timing, of hepatocyte and adipocyte DAMPs to adipose macrophage activation is an important one, and one that our data do not directly address. It is however likely that the contribution of a steatotic liver to systemic DAMPs is very dynamic, varying not just with pharmaceuticals and botanicals, but also with intestinal permeability and certain nutrients (alcohol and high fat meals) (2).

None of the references provided by the authors refute our demonstrated pathway. For example loss of NASH after removal of epididymal white adipose tissue (eWAT) simply shows that there is a requirement for eWAT tissue for inflammation. This is likely because there is a requirement for high levels of leptin for a maximal inflammatory response. The point being that all forms of inflammation would likely be greater in the intact as compared to the eWAT-lacking mouse. This does not mean that eWAT is initiating liver inflammation, but rather its absence is removing a required mediator of inflammation.

In summary we have convincingly demonstrated a novel pathway, which likely supplements other local and systemic inflammatory pathways that are present in the metabolic syndrome. The relative contribution of each of these to the timing and severity of tissue inflammation will be an important area of study.