Breast cancer (BrCa) is the malignant tumor that most seriously threatens female health; however, the molecular mechanism underlying its progression remains unclear. Here, we found that conditional deletion of hypermethylated in cancer 1 (HIC1) in the mouse mammary gland might contribute to premalignant transformation in the early stage of tumor formation. Moreover, the chemokine (C-X-C motif) ligand 14 (CXCL14) secreted by HIC1-deleted BrCa cells bound to its cognate receptor GPR85 on mammary fibroblasts in the microenvironment and was responsible for activating these fibroblasts via the ERK1/2, Akt, and neddylation pathways, whereas the activated fibroblasts promoted BrCa progression via the induction of epithelial-mesenchymal transition (EMT) by the C-C chemokine ligand 17 (CCL17)/CC chemokine receptor 4 (CCR4) axis. Finally, we confirmed that the HIC1-CXCL14-CCL17 loop was associated with the malignant progression of BrCa. Therefore, the crosstalk between HIC1-deleted BrCa cells and mammary fibroblasts might play a critical role in BrCa development. Exploring the progression of BrCa from the perspective of microenvironment will be beneficial for identifying the potential prognostic markers of breast tumor and providing more effective treatment strategies.

is a direct target gene of HIC1. 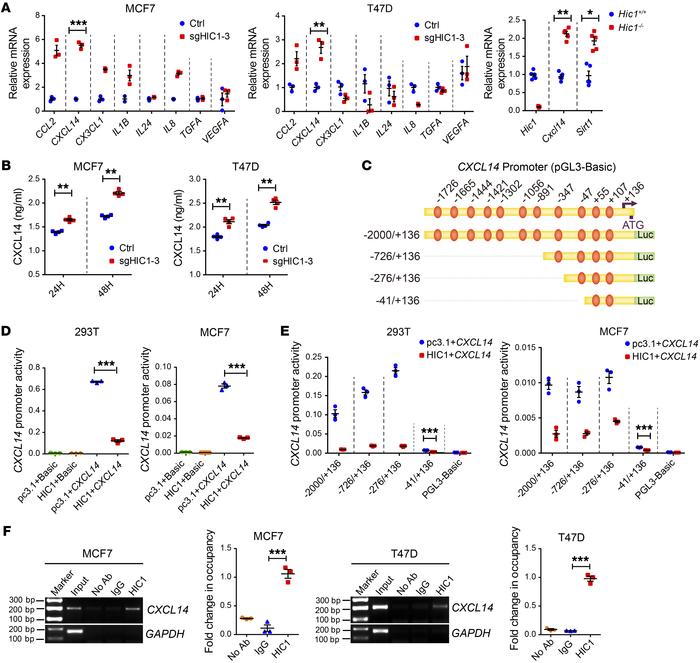 () Left: relative RT-qPCR analysis of 8 differentially expressed genes (, , , , , , , and ) after HIC1 deletion in MCF7 and T47D cells ( = 3). Right: relative RT-qPCR analysis of , , and mRNA levels in the mammary glands of or mice ( = 5). () ELISA analysis of CXCL14 levels in the CM of MCF7sgHIC1MCF7Ctrl and T47DsgHIC1T47DCtrl cells. The supernatants were collected after culture of the cells for 24 hours or 48 hours ( = 4). () Schematic of the promoter region. The positions of selected consensus binding sites are indicated above the diagram; the lengths of the promoter constructs used in the reporter assays are shown below. () promoter activity after transfection of the full-length construct (–2000/+136) alone or together with HIC1 expression vectors. p–GL3-Basic, control for promoter constructs; pc3.1, control for the HIC1 expression vector. The results are expressed as the ratio of firefly luciferase to luciferase ( = 3). () promoter activity after cotransfection with 100 ng of the HIC1 expression vector and each of the promoter constructs. The –41/+136 construct had a significant repressive effect, despite its lower promoter activity ( = 3). () ChIP analysis of HIC1 at the promoter region in MCF7 and T47D cells ( = 3). Data are shown as mean ± SEM. = 3 independent experiments. * < 0.05; ** < 0.01; *** < 0.001, 2-tailed Student’s tests (, , and ), 1-way ANOVA followed by Bonferroni’s post hoc test ( and ).