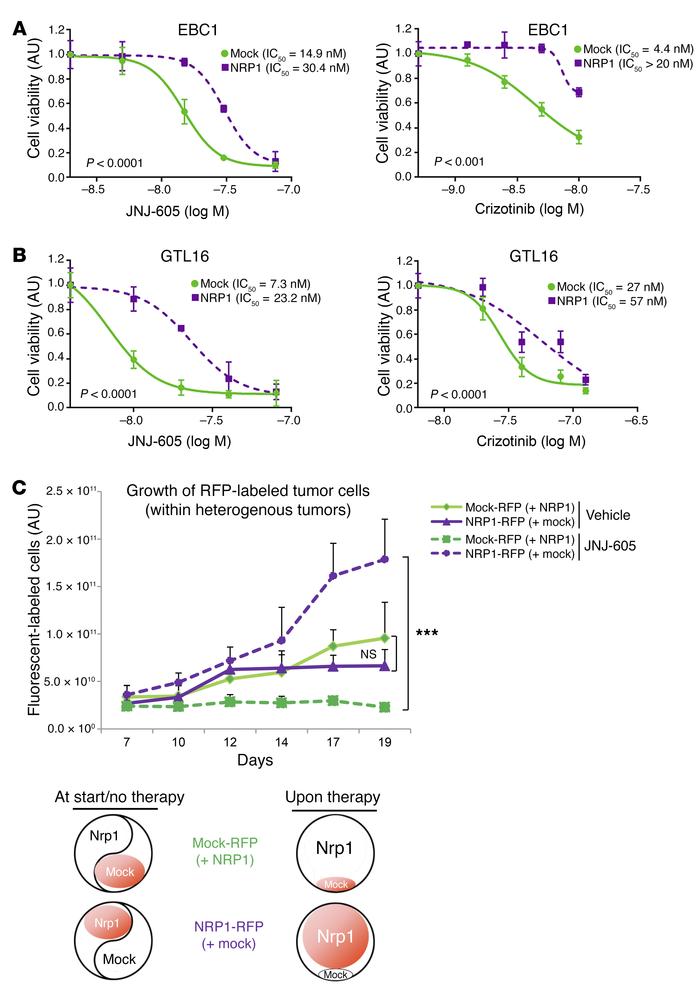 ( and ) The viability of EBC1 () or GTL16 () Met-addicted cells, either NRP1 overexpressing or mock transfected, was assessed in the presence of increasing concentrations of the indicated Met inhibitors ( > 6). IC50 values were calculated by Graphpad. () NOD-SCID mice were injected subcutaneously with a heterogeneous mix of EBC1 cells, half control and half overexpressing NRP1 ( = 5, per experimental condition). In 2 complementary settings, one of the cell populations was previously marked by fluorescent Turbo-RFP, featuring a mock-RFP–labeled mix and a NRP1-RFP–labeled mix, which allowed us to follow the growth of intermingled fluorescent cells expressing different NRP1 levels by in vivo imaging with the IVIS Spectrum CT system ( axis). As expected, mouse treatment with the Met-inhibitor JNJ-605 (2.5 mg/kg by daily oral gavage) impaired the growth of control cells (revealed by fluorescent signal in mock-RFP mix tumors in this bar graph, and by gene marker–specific qPCR in ). However, NRP1-overexpressing cells (revealed by fluorescence in NRP1-RFP mix tumors in this bar graph, and by gene marker–specific qPCR in ) were relatively refractory to targeted therapy. Indeed, due to overgrowth of NRP1hi cells, all tumors developed irrespective of targeted therapy (see ). In all panels, the statistical analysis was done by 2-way ANOVA with Bonferroni’s correction, comparing the behavior of NRP1hi and mock-transfected control cells; *** < 0.0001.