Mutations in superoxide dismutase 1 (SOD1) are responsible for 20% of familial ALS. Given the gain of toxic function in this dominantly inherited disease, lowering SOD1 mRNA and protein is predicted to provide therapeutic benefit. An early generation antisense oligonucleotide (ASO) targeting SOD1 was identified and tested in a phase I human clinical trial, based on modest protection in animal models of SOD1 ALS. Although the clinical trial provided encouraging safety data, the drug was not advanced because there was progress in designing other, more potent ASOs for CNS application. We have developed next-generation SOD1 ASOs that more potently reduce SOD1 mRNA and protein and extend survival by more than 50 days in SOD1G93A rats and by almost 40 days in SOD1G93A mice. We demonstrated that the initial loss of compound muscle action potential in SOD1G93A mice is reversed after a single dose of SOD1 ASO. Furthermore, increases in serum phospho-neurofilament heavy chain levels, a promising biomarker for ALS, are stopped by SOD1 ASO therapy. These results define a highly potent, new SOD1 ASO ready for human clinical trial and suggest that at least some components of muscle response can be reversed by therapy.

New SOD1 ASOs reduce mRNA and protein in vitro and in vivo, and are more potent than the previous SOD1 lead. 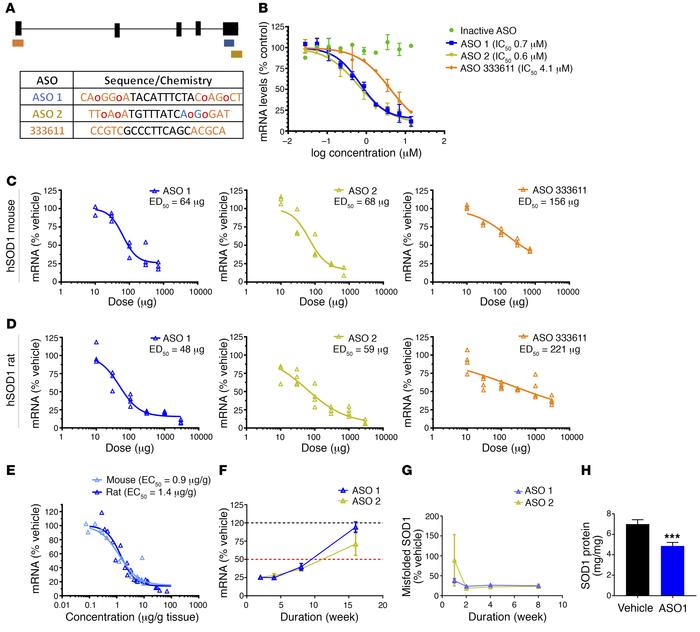 () Oligonucleotides containing phosphorothioate backbone modifications (unmodified phosphodiester linkages noted with red o) and 2′-O-methoxyethylribose (MOE; orange) and (S)-2′,4′-constrained 2′-O-ethyl (cEt; blue) groups in the 5′ and 3′ wings were targeted to the 3′ UTR of SOD1 mRNA (ASO 1 and ASO 2), exon 1 of SOD1 mRNA (333611), or nothing in the human or rodent genome (inactive ASO). The sequences evaluated and location of chemical modifications are provided. () SHSY5Y cells were treated with SOD1 ASOs by electroporation. After 24 hours, SOD1 mRNA was measured. New SOD1 ASOs are more potent than the previous lead ASO ( = 2 per concentration, average ± range). ( and ) Candidate ASOs for human SOD1 were screened in mice () and rats () expressing human SOD1. ASOs were injected i.c.v. (mice) and intrathecally (rats) and mRNA was measured in lumbar spinal cord 2 weeks after dosing. Potent ASOs were identified that lowered SOD1 mRNA in both species with ED50 between 50 μg and 70 μg ( = 3 per dose, individual animals). () Tissue concentrations of ASO were measured and correlated with SOD1 mRNA lowering, demonstrating an EC50 of 0.9 μg/g in mice and 1.4 μg/g in rats ( = 24). () A single intrathecal bolus of 500 μg ASO 1 or ASO 2 was given to SOD1G93A rats. SOD1 mRNA levels were assessed in the spinal cord at 2, 4, 8, and 16 weeks after bolus. ASO 1 and ASO 2 suppressed SOD1 mRNA levels for more than 8 weeks ( = 2–7 per time point, average ± SEM). () A single intraventricular bolus of ASO 1 or ASO 2 was given to SOD1G93A rats. Misfolded SOD1 protein from spinal cord was assessed at 1, 2, 4, and 8 weeks after bolus ( = 7 per time point, average ± SEM). () Six weeks after a single intraventricular bolus of ASO 1, SOD1 protein was quantified in the lumbar spinal cord of SOD1G93A rats. *** = 0.0005.