The atypical cadherin FAT4 has established roles in the regulation of planar cell polarity and Hippo pathway signaling that are cell context dependent. The recent identification of FAT4 mutations in Hennekam syndrome, features of which include lymphedema, lymphangiectasia, and mental retardation, uncovered an important role for FAT4 in the lymphatic vasculature. Hennekam syndrome is also caused by mutations in collagen and calcium binding EGF domains 1 (CCBE1) and ADAM metallopeptidase with thrombospondin type 1 motif 3 (ADAMTS3), encoding a matrix protein and protease, respectively, that regulate activity of the key prolymphangiogenic VEGF-C/VEGFR3 signaling axis by facilitating the proteolytic cleavage and activation of VEGF-C. The fact that FAT4, CCBE1, and ADAMTS3 mutations underlie Hennekam syndrome suggested that all 3 genes might function in a common pathway. We identified FAT4 as a target gene of GATA-binding protein 2 (GATA2), a key transcriptional regulator of lymphatic vascular development and, in particular, lymphatic vessel valve development. Here, we demonstrate that FAT4 functions in a lymphatic endothelial cell–autonomous manner to control cell polarity in response to flow and is required for lymphatic vessel morphogenesis throughout development. Our data reveal a crucial role for FAT4 in lymphangiogenesis and shed light on the mechanistic basis by which FAT4 mutations underlie a human lymphedema syndrome.

LEC polarity is impaired in embryos. 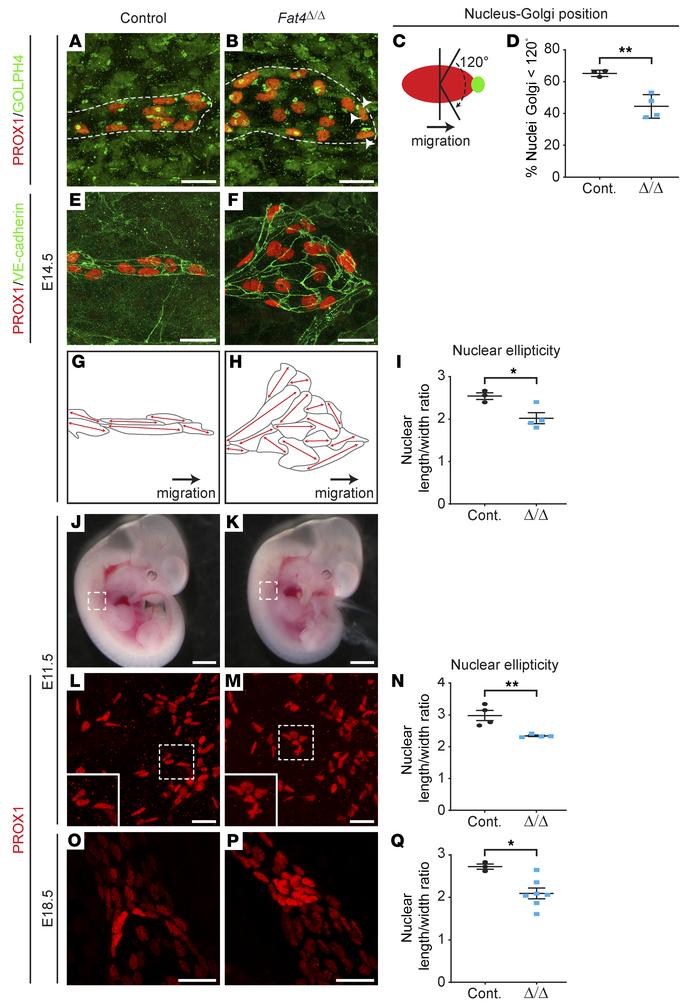 Whole-mount immunostaining of the sprouting front in E14.5 dorsal skins stained for PROX1 (red) and GOLPH4 or VE-cadherin (green) revealed that LECs were more rounded (, , , and ), with reduced nuclear ellipticity compared with littermate control LECs (). Representative cell shape schematics ( and ), based on the corresponding vessels in and , highlight abnormal LEC elongation axes (red double-headed arrows) with respect to the direction of vessel migration (black arrows) in embryos. Reduced nuclear ellipticity was also observed in LECs (PROX1, red) sprouting from the cardinal vein at E11.5 (–) and PROX1hi valve–forming cells in the mesentery at E18.5 (–). Boxed regions in and reflect the location of the cells shown in and . Boxed regions in and are shown at higher magnification in the insets. GOLPH4 (green, and ) staining highlighting the Golgi (green, ), normally located ahead of the nucleus (red, ) in a 120° arc in migrating cells, revealed that LECs in E14.5 sprouting dermal lymphatic vessels (outlined with the dashed gray line) had reduced forward positioning of the Golgi (, arrowheads, and ). Data indicate the mean ± SD () or the mean ± SEM (, , and ). = 3 control embryos and = 4 embryos (4 independent E14.5 litters) ( and ); = 4 control embryos and = 4 embryos (3 independent E11.5 litters) (); = 3 control embryos and = 7 embryos (3 independent E18.5 litters) (). * < 0.05 and ** < 0.01, by 2-tailed Student’s test. Scale bars: 1 mm ( and ), 25 μm (, , , , , , , and ).