The atypical cadherin FAT4 has established roles in the regulation of planar cell polarity and Hippo pathway signaling that are cell context dependent. The recent identification of FAT4 mutations in Hennekam syndrome, features of which include lymphedema, lymphangiectasia, and mental retardation, uncovered an important role for FAT4 in the lymphatic vasculature. Hennekam syndrome is also caused by mutations in collagen and calcium binding EGF domains 1 (CCBE1) and ADAM metallopeptidase with thrombospondin type 1 motif 3 (ADAMTS3), encoding a matrix protein and protease, respectively, that regulate activity of the key prolymphangiogenic VEGF-C/VEGFR3 signaling axis by facilitating the proteolytic cleavage and activation of VEGF-C. The fact that FAT4, CCBE1, and ADAMTS3 mutations underlie Hennekam syndrome suggested that all 3 genes might function in a common pathway. We identified FAT4 as a target gene of GATA-binding protein 2 (GATA2), a key transcriptional regulator of lymphatic vascular development and, in particular, lymphatic vessel valve development. Here, we demonstrate that FAT4 functions in a lymphatic endothelial cell–autonomous manner to control cell polarity in response to flow and is required for lymphatic vessel morphogenesis throughout development. Our data reveal a crucial role for FAT4 in lymphangiogenesis and shed light on the mechanistic basis by which FAT4 mutations underlie a human lymphedema syndrome. 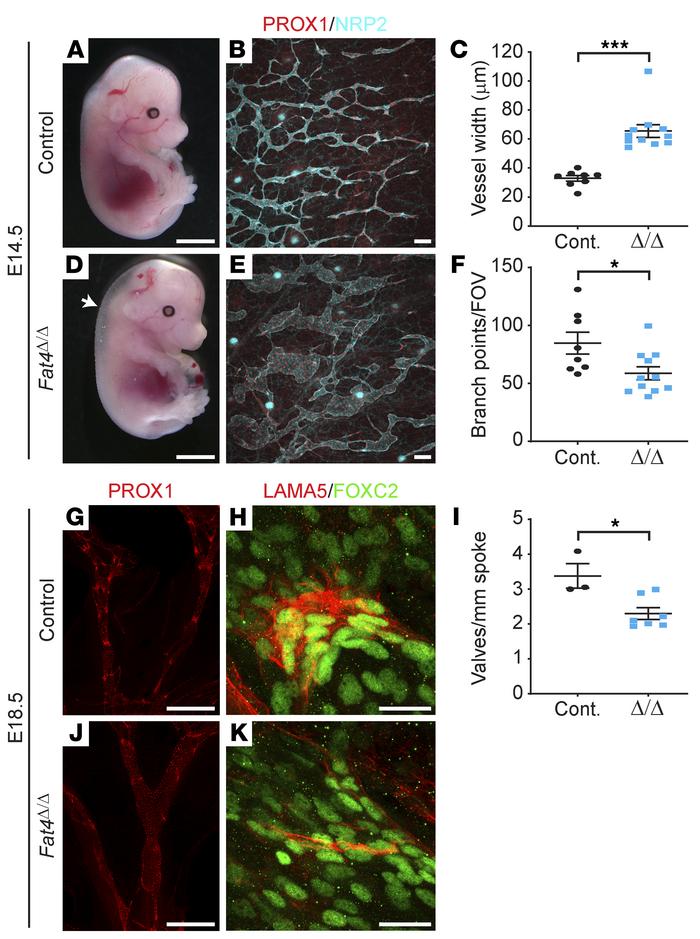