We used signal transducer and activator of transcription 4 (STAT4) and STAT6 gene knockout (–/–) mice as recipients of fully mismatched cardiac allografts to study the role of T-cell costimulatory pathways in regulating allogeneic T-helper 1 (Th1) versus Th2 responses in vivo. STAT4–/– mice have impaired Th1 responses, whereas STAT6–/– mice do not generate normal Th2 responses. Cardiac allografts from C57BL/6 mice were transplanted into normal wild-type (WT), STAT4–/–, and STAT6–/– BALB/c recipients. STAT4–/– and STAT6–/– mice rejected their grafts with the same tempo as untreated WT recipients. CD28-B7 blockade by a single injection of CTLA4Ig induced long-term engraftment and donor-specific tolerance in all three groups of recipients. CD154 blockade by a single injection of MR1 was effective in prolonging allograft survival and inducing tolerance in STAT4–/– mice but was only marginally effective in STAT6–/– recipients and WT controls. In addition, a similar protocol of MR1 was ineffective in prolonging graft survival in CD28–/– BALB/c recipients, suggesting that the lack of efficacy seen in WT and STAT6–/– mice is not due to the presence of a functional CD28-B7 pathway. Furthermore, there was a similar differential effect of CD28-B7 versus CD154-CD40 blockade in inhibiting immune responses in animals immunized with ovalbumin and complete Freund’s adjuvant. These novel data indicate that Th1 and Th2 cells are differentially regulated by CD28-B7 versus CD154-CD40 costimulation pathways in vivo and may have potential implications for the development of therapeutic strategies such as T-cell costimulatory blockade in humans. 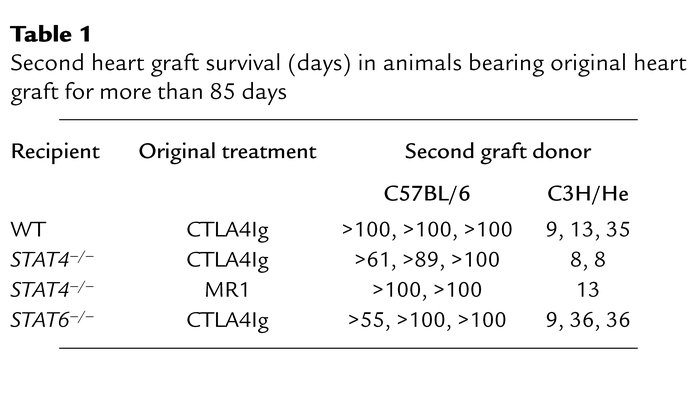