Fibrodysplasia ossificans progressiva (FOP) is a rare and intractable disease characterized by extraskeletal bone formation through endochondral ossification. Patients with FOP harbor point mutations in ACVR1, a type I receptor for BMPs. Although mutated ACVR1 (FOP-ACVR1) has been shown to render hyperactivity in BMP signaling, we and others have uncovered a mechanism by which FOP-ACVR1 mistransduces BMP signaling in response to Activin-A, a molecule that normally transduces TGF-β signaling. Although Activin-A evokes enhanced chondrogenesis in vitro and heterotopic ossification (HO) in vivo, the underlying mechanisms have yet to be revealed. To this end, we developed a high-throughput screening (HTS) system using FOP patient–derived induced pluripotent stem cells (FOP-iPSCs) to identify pivotal pathways in enhanced chondrogenesis that are initiated by Activin-A. In a screen of 6,809 small-molecule compounds, we identified mTOR signaling as a critical pathway for the aberrant chondrogenesis of mesenchymal stromal cells derived from FOP-iPSCs (FOP-iMSCs). Two different HO mouse models, an FOP model mouse expressing FOP-ACVR1 and an FOP-iPSC–based HO model mouse, revealed critical roles for mTOR signaling in vivo. Moreover, we identified ENPP2, an enzyme that generates lysophosphatidic acid, as a linker of FOP-ACVR1 and mTOR signaling in chondrogenesis. These results uncovered the crucial role of the Activin-A/FOP-ACVR1/ENPP2/mTOR axis in FOP pathogenesis. 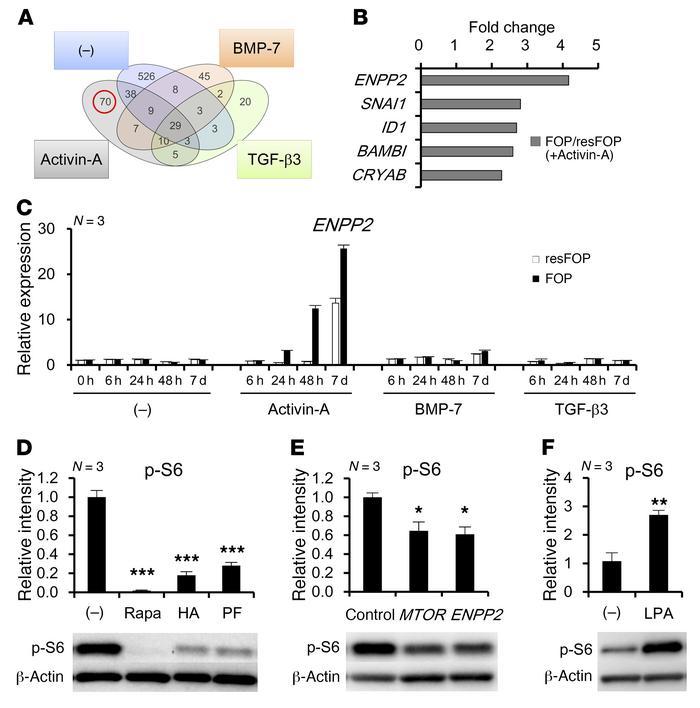