The progressive death of retinal ganglion cells and resulting visual deficits are hallmarks of glaucoma, but the underlying mechanisms remain unclear. In many neurodegenerative diseases, cell death induced by primary insult is followed by a wave of secondary loss. Gap junctions (GJs), intercellular channels composed of subunit connexins, can play a major role in secondary cell death by forming conduits through which toxic molecules from dying cells pass to and injure coupled neighbors. Here we have shown that pharmacological blockade of GJs or genetic ablation of connexin 36 (Cx36) subunits, which are highly expressed by retinal neurons, markedly reduced loss of neurons and optic nerve axons in a mouse model of glaucoma. Further, functional parameters that are negatively affected in glaucoma, including the electroretinogram, visual evoked potential, visual spatial acuity, and contrast sensitivity, were maintained at control levels when Cx36 was ablated. Neuronal GJs may thus represent potential therapeutic targets to prevent the progressive neurodegeneration and visual impairment associated with glaucoma.

Expression of Cx36 is upregulated in experimental glaucoma. 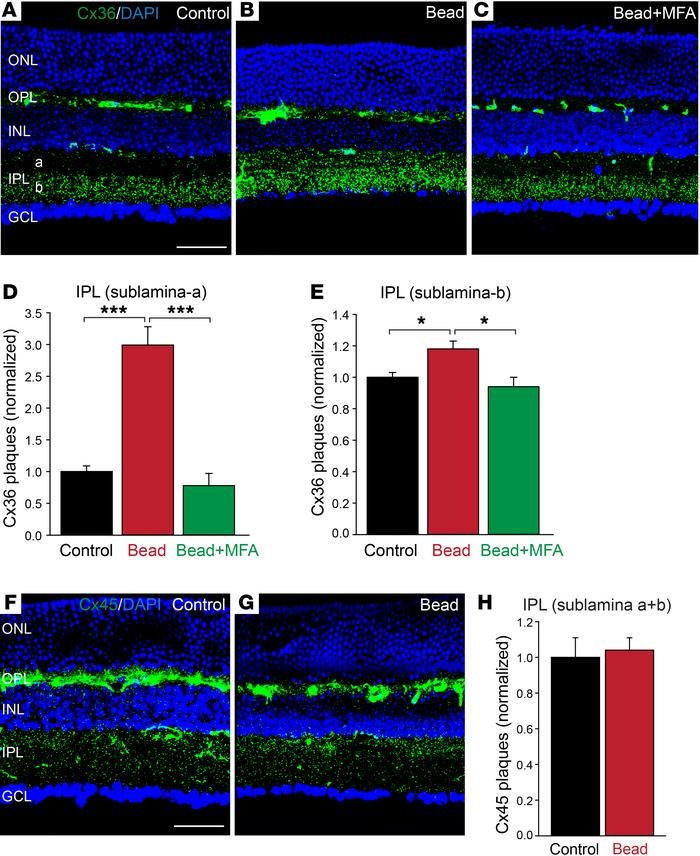 (–) Representative images of vertical sections of C57BL/6 mouse retinas immunostained for Cx36 and counterstained with DAPI under control condition and 8 weeks after microbead injection with or without MFA treatment. Scale bar: 50 μm for all panels. ( and ) Quantification of the Cx36 immunolabeled plaques revealed a significant upregulation in the IPL of the glaucomatous retina specifically in the sublamina-a. No significant change in Cx36 expression or distribution was observed in glaucomatous retinas of MFA-treated mice. Plaque counts were performed per 16 × 300 μm area for sublamina-a and 33 × 300 μm area for sublamina-b in at least 8 sections and averaged across retinas (5 retinas per group). ( and ) Representative images of vertical retinal sections immunostained for Cx45 from control and glaucomatous mice. Scale bar: 50 μm in both panels. () Quantification of the number of Cx45 immunoreactive plaques in the IPL of control and glaucomatous retinas ( = 4 retinas per group). Plaques were counted per 50 × 300 μm area covering both sublamina (a+b) of the IPL. Z-stack: 5 sections, 0.7-μm steps for all images. All data are presented as mean ± SEM. * < 0.05, *** < 0.001, Student’s test.