Paradoxically, during early tumor development in many cancer types, TGF-β acts as a tumor suppressor, whereas in the advanced stages of these cancers, increased TGF-β expression is linked to high metastasis and poor prognosis. These findings suggest that unidentified mechanisms may function to rewire TGF-β signaling toward its prometastatic role in cancer cells. Our current study using non–small-cell lung carcinoma (NSCLC) cell lines, animal models, and clinical specimens demonstrates that suppression of SMAD2, with SMAD3 function intact, switches TGF-β–induced transcriptional responses to a prometastatic state. Importantly, we identified chaperonin containing TCP1 subunit 6A (CCT6A) as an inhibitor and direct binding protein of SMAD2 and found that CCT6A suppresses SMAD2 function in NSCLC cells and promotes metastasis. Furthermore, selective inhibition of SMAD3 or CCT6A efficiently suppresses TGF-β–mediated metastasis. Our findings provide a mechanism that directs TGF-β signaling toward its prometastatic arm and may contribute to the development of therapeutic strategies targeting TGF-β for NSCLC. 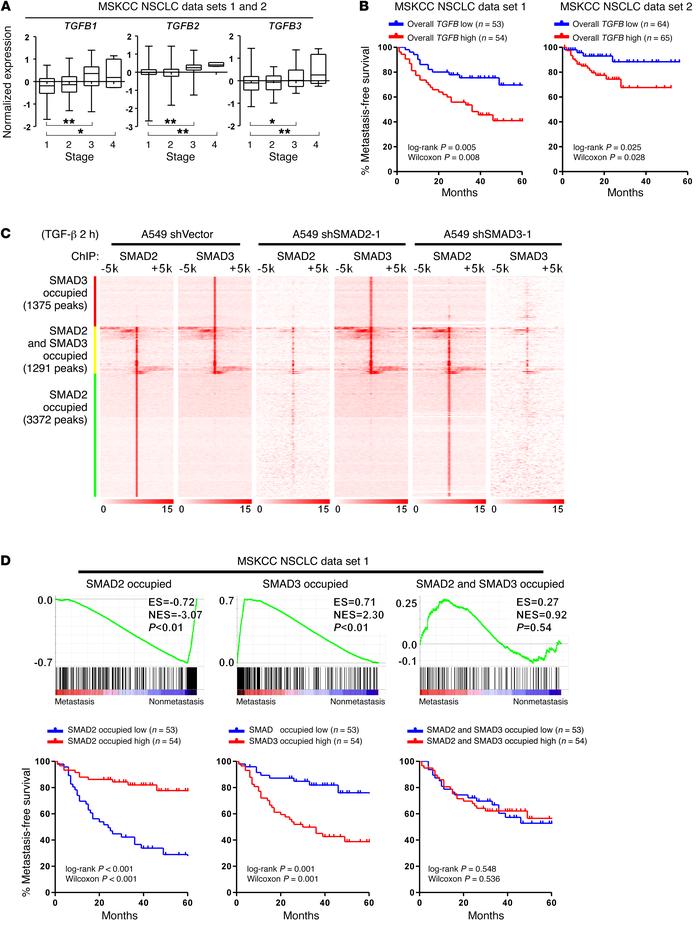 () Analysis of publicly available MSKCC NSCLC data sets 1 and 2 indicates that the mRNA expression of , , and is significantly increased in patients with stage 3 or stage 4 NSCLC. = 153 cases (stage 1); = 35 cases (stage 2); = 43 cases (stage 3); and = 5 cases (stage 4). Box and whiskers plots represent the mRNA levels. * < 0.05 and ** < 0.01, by 1-way ANOVA. () Kaplan-Meier analysis indicates that when stratifying patients by the median level of overall (average of , , and ), a high level of overall (average of , , and ) is associated with a shorter metastasis-free survival time in patients in the MSKCC NSCLC data sets 1 and 2. () Heatmap of the ChIP enrichment signal surrounding SMAD2 and SMAD3 peaks shows the chromosomal distribution of SMAD2 and SMAD3 in the indicated A549 cells. () GSEA and Kaplan-Meier analysis indicate that attenuated SMAD2-specific and enhanced SMAD3-specific transcripts are present in NSCLC patients with an increased metastatic potential in association with a shorter metastasis-free survival in the MSKCC NSCLC data set 1, whereas targeted genes shared by both SMAD2 and SMAD3 are not associated with metastasis status. The definition of “high” and “low” expression of each gene set was stratified by the median of the normalized expression levels of each gene in the set. ES, enrichment score; NES, normalized enrichment score.