Worldwide epidemics of metabolic diseases, including liver steatosis, are associated with an increased frequency of malignancies, showing the highest positive correlation for liver cancer. The heterogeneity of liver cancer represents a clinical challenge. In liver, the transcription factor PPARγ promotes metabolic adaptations of lipogenesis and aerobic glycolysis under the control of Akt2 activity, but the role of PPARγ in liver tumorigenesis is unknown. Here we have combined preclinical mouse models of liver cancer and genetic studies of a human liver biopsy atlas with the aim of identifying putative therapeutic targets in the context of liver steatosis and cancer. We have revealed a protumoral interaction of Akt2 signaling with hepatocyte nuclear factor 1α (HNF1α) and PPARγ, transcription factors that are master regulators of hepatocyte and adipocyte differentiation, respectively. Akt2 phosphorylates and inhibits HNF1α, thus relieving the suppression of hepatic PPARγ expression and promoting tumorigenesis. Finally, we observed that pharmacological inhibition of PPARγ is therapeutically effective in a preclinical murine model of steatosis-associated liver cancer. Taken together, our studies in humans and mice reveal that Akt2 controls hepatic tumorigenesis through crosstalk between HNF1α and PPARγ.

HNF1α is a novel negative regulator of gene transcription. 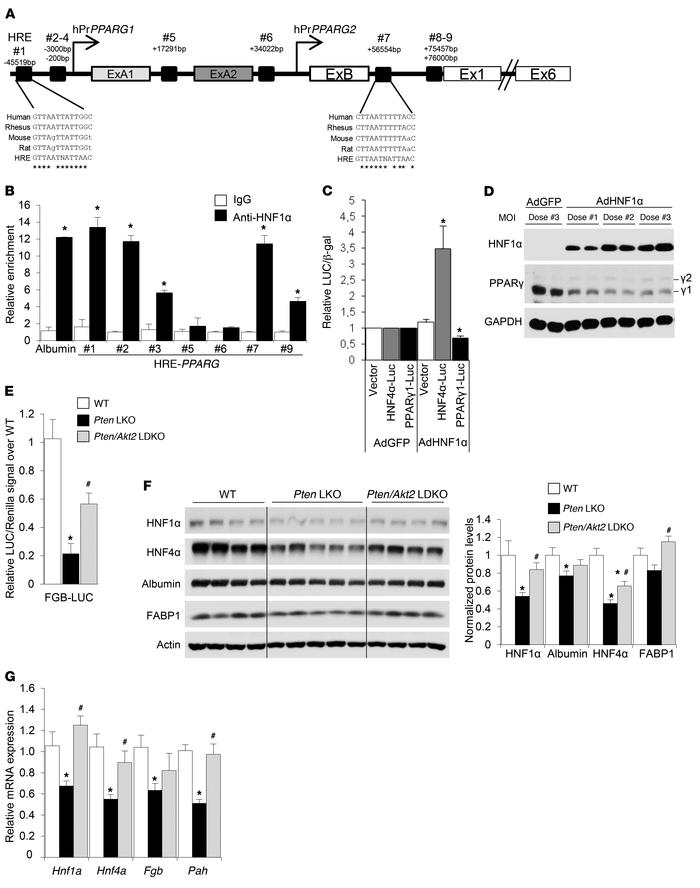