Induction of myelin-specific CD4 T cells is a pivotal event in the development of experimental autoimmune encephalomyelitis (EAE). Other checkpoints in EAE pathogenesis have not been clearly defined, although multiple genetic loci are known to influence EAE development. We report here that targeted mutation of the heat-stable antigen (HSA) abrogates development of EAE despite a complete lack of effect on induction of autoimmune T cells. To test whether T-cell expression of HSA is sufficient, we created transgenic mice in which HSA is expressed exclusively in the T-cell lineage. We found that these mice remain resistant to EAE induction. Adoptive transfer studies demonstrate that both T cells and non–T cells must express HSA in order for the pathogenic T cells to execute their effector function. Moreover, HSAIg, a fusion protein consisting of the extracellular domain of the HSA and the Fc portion of immunoglobulin, drastically ameliorates the clinical sign of EAE even when administrated after self-reactive T cells had been expanded. Thus, identification of HSA as a novel checkpoint, even after activation and expansion of self-reactive T cells, provides a novel approach for immunotherapy of autoimmune neurologic diseases, such as multiple sclerosis. 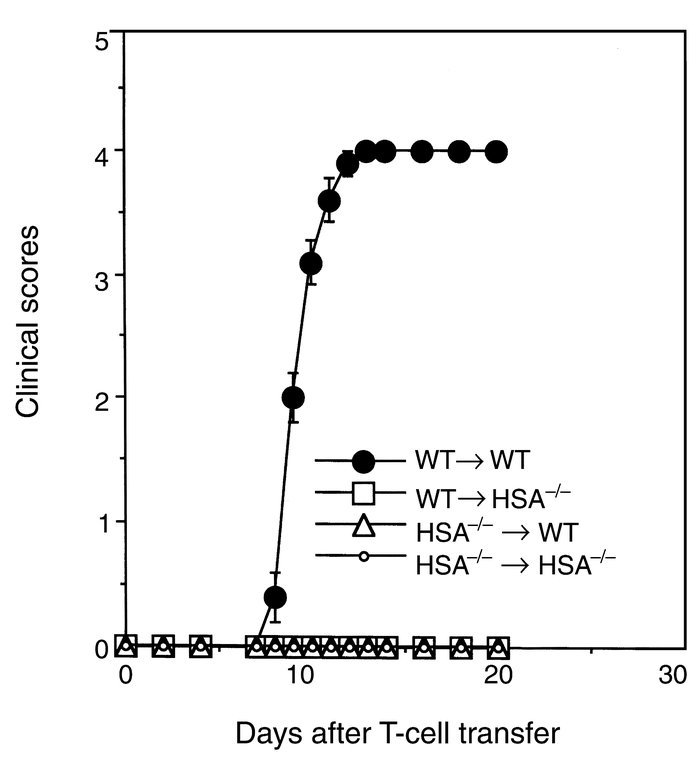