The nuclear receptors PPARα (encoded by ) and farnesoid X receptor (FXR, encoded by ) are activated in the liver in the fasted and fed state, respectively. PPARα activation induces fatty acid oxidation, while FXR controls bile acid homeostasis, but both nuclear receptors also regulate numerous other metabolic pathways relevant to liver energy balance. Here we review evidence that they function coordinately to control key nutrient pathways, including fatty acid oxidation and gluconeogenesis in the fasted state and lipogenesis and glycolysis in the fed state. We have also recently reported that these receptors have mutually antagonistic impacts on autophagy, which is induced by PPARα but suppressed by FXR. Secretion of multiple blood proteins is a major drain on liver energy and nutrient resources, and we present preliminary evidence that the liver secretome may be directly suppressed by PPARα, but induced by FXR. Finally, previous studies demonstrated a striking deficiency in bile acid levels in malnourished mice that is consistent with results in malnourished children. We present evidence that hepatic targets of PPARα and FXR are dysregulated in chronic undernutrition. We conclude that PPARα and FXR function coordinately to integrate liver energy balance. 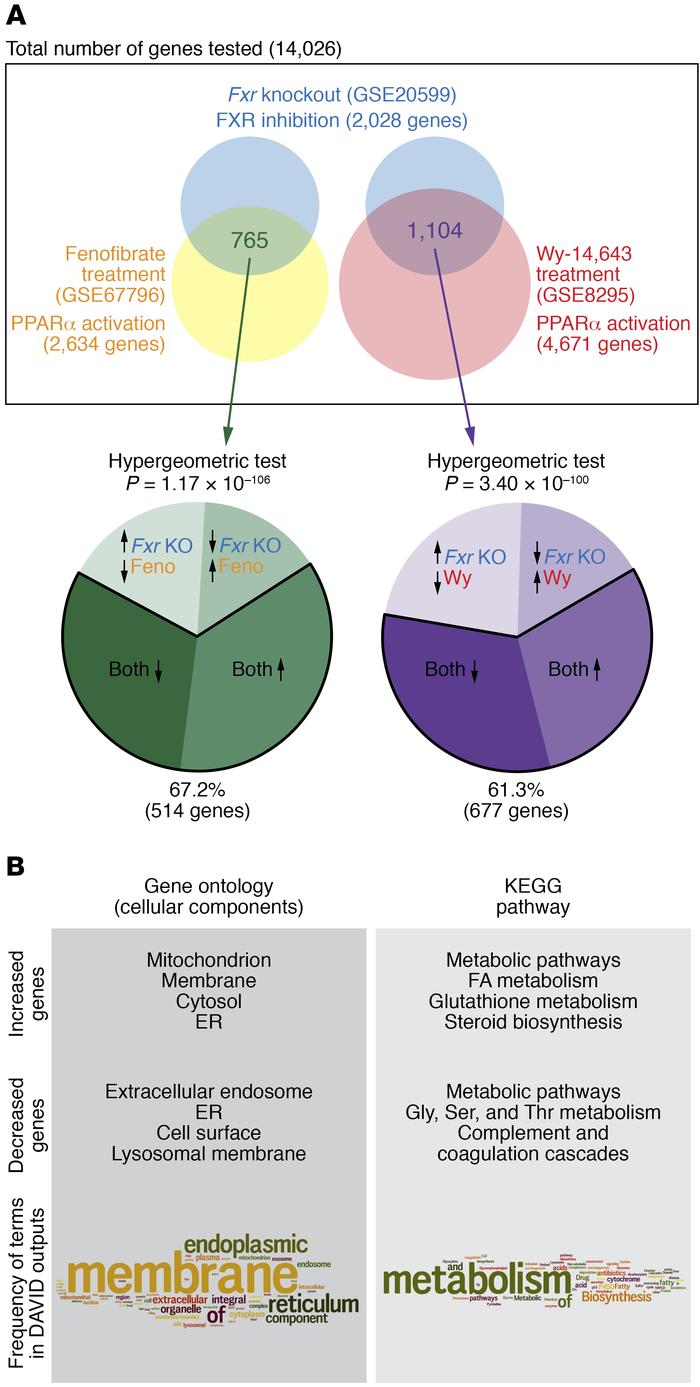 () Three microarray data sets (fenofibrate, GSE67796; knockout, GSE20599; Wy-14,643, GSE8295) were analyzed. Among a total of 14,026 genes, 2,634 (for fenofibrate), 2,028 (for knockout), and 4,671 genes (for Wy-14,643) were responsive to either PPARα activation (fenofibrate and Wy-14,643 treatment) or FXR genetic loss ( < 0.01), and many were responsive to both — fenofibrate treatment and knockout had 765 genes in common, and knockout and Wy-14,643 treatment had 1,104 genes in common. The majority of overlapping genes were regulated in the same direction (induced or repressed in both; 67.2% and 61.3% in each comparison). () DAVID analysis ( of commonly regulated genes in the two comparisons of PPARα activation/FXR inhibition microarrays. Key aspects of increased or decreased genes were their locations in mitochondrion, membrane, endoplasmic reticulum, or extracellular space and functions as metabolic pathways, complement/coagulation, or fatty acid metabolism. Word cloud analysis ( showed representation of the frequency of terms in the DAVID analysis outputs of the Gene Ontology Cellular Component (left) and KEGG pathway (right) ( < 0.05).