Prader-Willi syndrome (PWS) is caused by a loss of paternally expressed genes in an imprinted region of chromosome 15q. Among the canonical PWS phenotypes are hyperphagic obesity, central hypogonadism, and low growth hormone (GH). Rare microdeletions in PWS patients define a 91-kb minimum critical deletion region encompassing 3 genes, including the noncoding RNA gene . Here, we found that protein and transcript levels of nescient helix loop helix 2 (NHLH2) and the prohormone convertase PC1 (encoded by ) were reduced in PWS patient induced pluripotent stem cell–derived (iPSC-derived) neurons. Moreover, and expression were reduced in hypothalami of fasted paternal knockout () mice. Hypothalamic and remained elevated following refeeding in association with relative hyperphagia in mice. -deficient mice display growth deficiencies as adolescents and hypogonadism, hyperphagia, and obesity as adults. has also been shown to promote expression. Humans and mice deficient in PC1 display hyperphagic obesity, hypogonadism, decreased GH, and hypoinsulinemic diabetes due to impaired prohormone processing. Here, we found that mice displayed in vivo functional defects in prohormone processing of proinsulin, pro-GH–releasing hormone, and proghrelin in association with reductions in islet, hypothalamic, and stomach PC1 content. Our findings suggest that the major neuroendocrine features of PWS are due to PC1 deficiency. 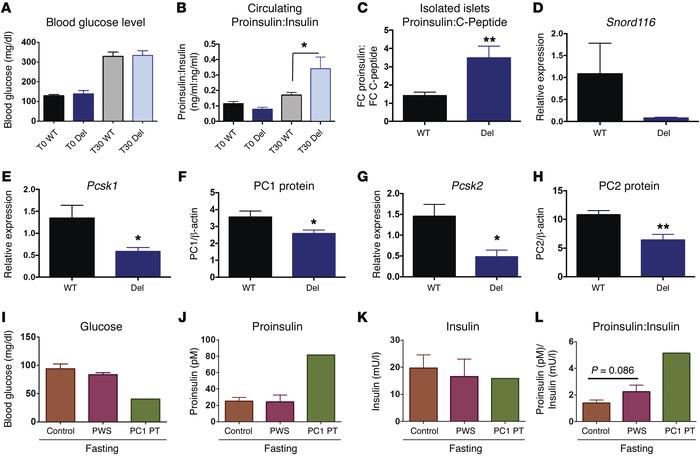 () There is no difference in blood glucose levels by genotype ( = 9 WT, = 7 DEL). () An increase in the ratio of proinsulin to insulin is detected 30 minutes after glucose stimulation ( = 9 WT, = 7 DEL). () The ratio of proinsulin to C-peptide in culture media is also increased in isolated islets ( = 9 WT, = 10 DEL). () is not expressed in islets ( = 6 WT, = 5 DEL). ( and ) and are downregulated in islets ( = 6 WT, = 5 DEL). ( and ) Both PC1 and PC2 protein levels are decreased in islets ( = 15 WT, = 15 DEL). () Fasting plasma glucose levels of PWS patients, a patient with an inactivating mutation in and age- and BMI-matched controls were measured ( = 25 unaffected controls, = 16 PWS patients, = 1 mutation patient). ( and ) Fasting proinsulin and insulin levels were measured ( = 25 unaffected controls, = 16 PWS patients, = 1 mutation patient). () The plasma proinsulin to insulin ratio is increased by 60% in individuals with PWS at fasting compared with control ( = 0.086) ( = 25 age/BMI-matched controls, = 16 PWS patients, = 1 mutation patient). This effect is intermediate to that observed in the patients segregating for hypomorphic alleles of and manifesting a 170% increase in plasma proinsulin to insulin ratio. All data are expressed as mean ± SEM. and were analyzed with 1-way ANOVA with post hoc Tukey test; comparisons between all groups. – were analyzed with a 2-tailed, type 3 Student’s test. Comparison between CON and PWS in – was done with a 2-tailed, type 3 Student’s test; there is no statistical analysis included the PC1 mutation patient, as there was only data from 1 patient. * < 0.05, ** < 0.01 vs. WT.