Rush desensitization (DS) is a widely used and effective clinical strategy for the rapid inhibition of IgE-mediated anaphylactic responses. However, the cellular targets and underlying mechanisms behind this process remain unclear. Recent studies have implicated mast cells (MCs) as the primary target cells for DS. Here, we developed a murine model of passive anaphylaxis with demonstrated MC involvement and an in vitro assay to evaluate the effect of DS on MCs. In contrast with previous reports, we determined that functional IgE remains on the cell surface of desensitized MCs following DS. Despite notable reductions in MC degranulation following DS, the high-affinity IgE receptor FcεRI was still capable of transducing signals in desensitized MCs. Additionally, we found that displacement of the actin cytoskeleton and its continued association with FcεRI impede the capacity of desensitized MCs to evoke the calcium response that is essential for MC degranulation. Together, these findings suggest that reduced degranulation responses in desensitized MCs arise from aberrant actin remodeling, providing insights that may lead to improvement of DS treatments for anaphylactic responses.

Complete depletion of surface IgE does not occur with desensitization. 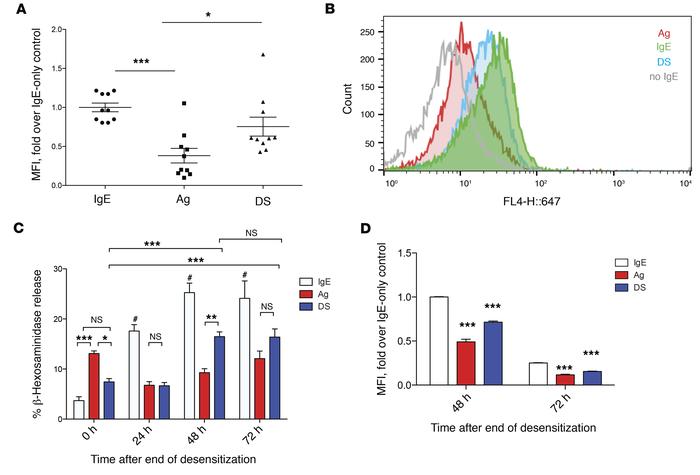 () IgE-sensitized mice were desensitized (DS), challenged with antigen (Ag), or injected with PBS (IgE). At the end of desensitization, mice were sacrificed for peritoneal lavage. Lavage cells were incubated with A647-labeled TNP-OVA for 1 hour on ice, then washed 5 times with PBS before fixation and assay via FACS. Data were expressed as fold median fluorescence intensity (MFI) over IgE alone. Data are combined from 2 experiments ( = 10). () 5 × 105 IgE-sensitized BMMCs per sample in quintuplicate were desensitized (blue), Ag challenged (red), or untreated (green), then labeled with A647–TNP-OVA as in . BMMCs without IgE were also incubated with labeled TNP-OVA as control (gray). A histogram representative of at least 3 experiments is shown. () 5 × 105 BMMCs per sample of IgE-alone (IgE), Ag-challenged (Ag), or desensitized (DS) cells were washed 3 times in PBS before resuspension in 500 μl RPMI without IgE. Zero to 72 hours later, cells were collected and challenged with 10 ng/ml Ag. Degranulation was measured using a β-hexosaminidase assay. () Control (IgE), Ag-challenged (Ag), or desensitized (DS) cells were incubated for 0 or 48 hours before being assayed for surface staining of IgE via FACS. Data are representative of at least 3 independent experiments. Data were analyzed via 1-way () or 2-way ( and ) ANOVA. Error bars indicate SEM. * < 0.05, ** < 0.01, *** < 0.001, # < 0.001 compared with all other groups.