Potent CD19-directed immunotherapies, such as chimeric antigen receptor T cells (CART) and blinatumomab, have drastically changed the outcome of patients with relapsed/refractory B cell acute lymphoblastic leukemia (B-ALL). However, CD19-negative relapses have emerged as a major problem that is observed in approximately 30% of treated patients. Developing approaches to preventing and treating antigen-loss escapes would therefore represent a vertical advance in the field. Here, we found that in primary patient samples, the IL-3 receptor α chain CD123 was highly expressed on leukemia-initiating cells and CD19-negative blasts in bulk B-ALL at baseline and at relapse after CART19 administration. Using intravital imaging in an antigen-loss CD19-negative relapse xenograft model, we determined that CART123, but not CART19, recognized leukemic blasts, established protracted synapses, and eradicated CD19-negative leukemia, leading to prolonged survival. Furthermore, combining CART19 and CART123 prevented antigen-loss relapses in xenograft models. Finally, we devised a dual CAR-expressing construct that combined CD19- and CD123-mediated T cell activation and demonstrated that it provides superior in vivo activity against B-ALL compared with single-expressing CART or pooled combination CART. In conclusion, these findings indicate that targeting CD19 and CD123 on leukemic blasts represents an effective strategy for treating and preventing antigen-loss relapses occurring after CD19-directed therapies 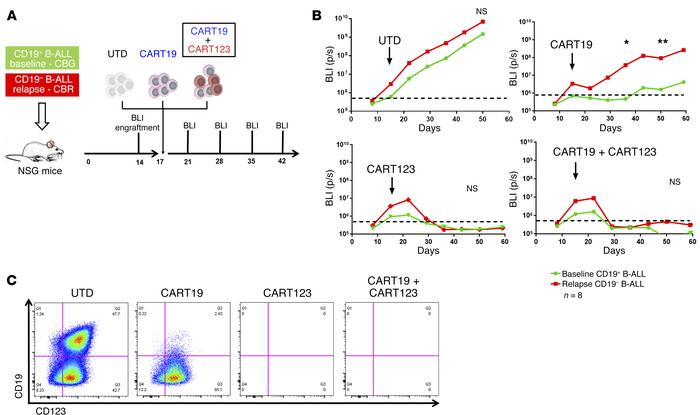 () Experiment schematic: NSG mice were engrafted with a 1:1 mixture of B-ALL blasts obtained from a patient (patient UPN#09) at baseline when the disease was CD19+CD123+ (CBG luciferase+) and at relapse when the disease was CD19–CD123+ (CBR luciferase+). At day 17, mice were randomized to receive CART19, control T cells (UTD), or the 1:1 pooled combination of CART123 and CART19. () Mice treated with UTD showed progression of both CD19+ baseline ALL and CD19– relapsed ALL, while mice receiving CART19 showed progression with a CD19-negative disease. Only CART123 or the combination of CART123 and CART19 was able to prevent the onset of CD19– relapse. () Representative leukemia phenotype observed in the spleen of mice sacrificed at day 50 (gated on human SSClo, CD45dim, live, single, GFP+ blasts): UTD-treated mice progress, with both CD19+ and CD19– ALL, while CART19-treated mice showed clear CD19-negative progression. CART123 and the combination of CART123 and CART19 led to the clearance of both CD19+ and CD19– leukemia in most of the mice. Representative of 2 independent experiments. Student’s test for each time point/ratio was used. * < 0.05; ** < 0.01.