Arterial blood pressure is controlled by vasodilatory factors such as nitric oxide (NO) that are released from the endothelium under the influence of fluid shear stress exerted by flowing blood. Flow-induced endothelial release of ATP and subsequent activation of Gq/G11–coupled purinergic P2Y2 receptors have been shown to mediate fluid shear stress–induced stimulation of NO formation. However, the mechanism by which fluid shear stress initiates these processes is unclear. Here, we have shown that the endothelial mechanosensitive cation channel PIEZO1 is required for flow-induced ATP release and subsequent P2Y2/Gq/G11–mediated activation of downstream signaling that results in phosphorylation and activation of AKT and endothelial NOS. We also demonstrated that PIEZO1-dependent ATP release is mediated in part by pannexin channels. The PIEZO1 activator Yoda1 mimicked the effect of fluid shear stress on endothelial cells and induced vasorelaxation in a PIEZO1-dependent manner. Furthermore, mice with induced endothelium-specific PIEZO1 deficiency lost the ability to induce NO formation and vasodilation in response to flow and consequently developed hypertension. Together, our data demonstrate that PIEZO1 is required for the regulation of NO formation, vascular tone, and blood pressure. 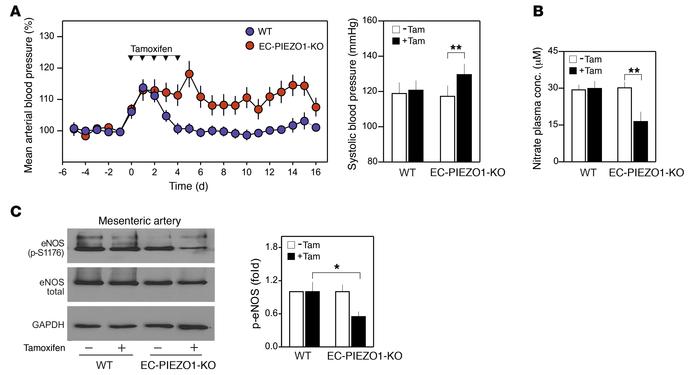