Hypertension is a leading risk factor for dementia, but the mechanisms underlying its damaging effects on the brain are poorly understood. Due to a lack of energy reserves, the brain relies on continuous delivery of blood flow to its active regions in accordance with their dynamic metabolic needs. Hypertension disrupts these vital regulatory mechanisms, leading to the neuronal dysfunction and damage underlying cognitive impairment. Elucidating the cellular bases of these impairments is essential for developing new therapies. Perivascular macrophages (PVMs) represent a distinct population of resident brain macrophages that serves key homeostatic roles but also has the potential to generate large amounts of reactive oxygen species (ROS). Here, we report that PVMs are critical in driving the alterations in neurovascular regulation and attendant cognitive impairment in mouse models of hypertension. This effect was mediated by an increase in blood-brain barrier permeability that allowed angiotensin II to enter the perivascular space and activate angiotensin type 1 receptors in PVMs, leading to production of ROS through the superoxide-producing enzyme NOX2. These findings unveil a pathogenic role of PVMs in the neurovascular and cognitive dysfunction associated with hypertension and identify these cells as a putative therapeutic target for diseases associated with cerebrovascular oxidative stress. 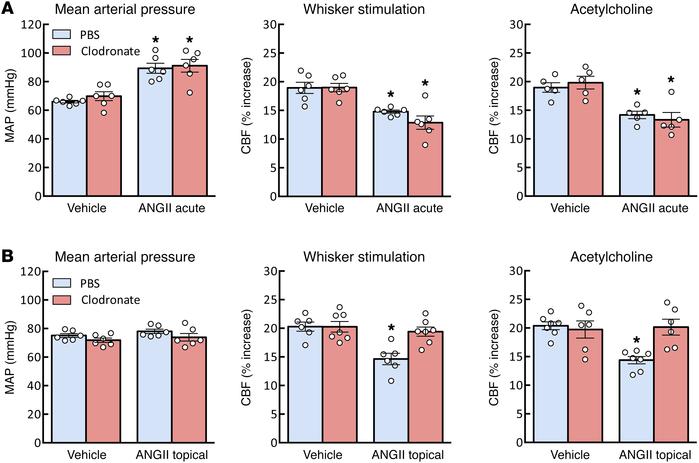