Wiskott-Aldrich syndrome (WAS) is associated with mutations in the WAS protein (WASp), which plays a critical role in the initiation of T cell receptor–driven (TCR-driven) actin polymerization. The clinical phenotype of WAS includes susceptibility to infection, allergy, autoimmunity, and malignancy and overlaps with the symptoms of dedicator of cytokinesis 8 (DOCK8) deficiency, suggesting that the 2 syndromes share common pathogenic mechanisms. Here, we demonstrated that the WASp-interacting protein (WIP) bridges DOCK8 to WASp and actin in T cells. We determined that the guanine nucleotide exchange factor activity of DOCK8 is essential for the integrity of the subcortical actin cytoskeleton as well as for TCR-driven WASp activation, F-actin assembly, immune synapse formation, actin foci formation, mechanotransduction, T cell transendothelial migration, and homing to lymph nodes, all of which also depend on WASp. These results indicate that DOCK8 and WASp are in the same signaling pathway that links TCRs to the actin cytoskeleton in TCR-driven actin assembly. Further, they provide an explanation for similarities in the clinical phenotypes of WAS and DOCK8 deficiency.

A DOCK8-WIP-WASp complex links the TCR to the actin cytoskeleton reorganization. 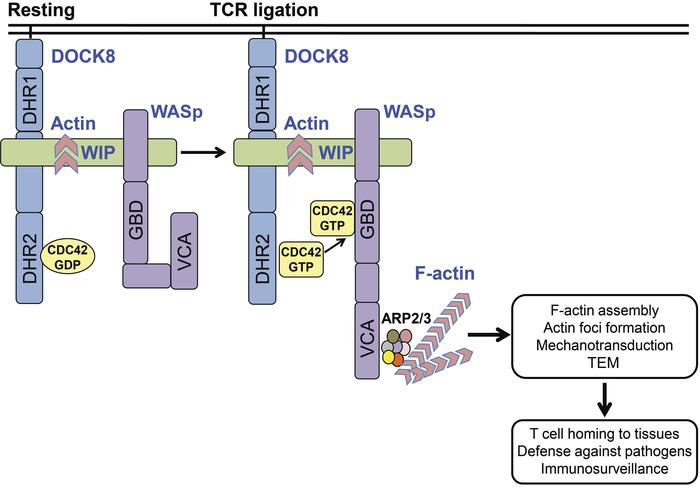 DOCK8, WIP, and WASp exist in a complex in T cells. TCR ligation activates DOCK8, promoting its GEF activity for CDC42. CDC42-GTP generated by DOCK8 binds to WASp, which is closely associated with DOCK8, causing it to assume an open conformation that allows its C-terminal verproliin, central, acidic (VCA) domain to bind to the ARP2/3 complex and initiate actin polymerization. The generated F-actin is stabilized by binding to WIP and is essential for actin cytoskeleton–dependent T cell functions. These include actin foci formation at the immune synapse, mechanotransduction, and TEM into LNs and tissues, both of which are critical for T cell–mediated immune surveillance.