The ability of glucose to stimulate insulin secretion from the pancreatic islets of Langerhans is enhanced by the intestinal hormone glucagon-like peptide 1 (GLP-1), which is secreted from the gut in response to nutrient ingestion. This action, called the incretin effect, accounts for as much as half of the postprandial insulin response and is exploited therapeutically for diabetes treatment through the use of incretin mimetic drugs and inhibitors of dipeptidyl peptidase 4, which degrades GLP-1. Despite a prominent role for incretin mimetics in diabetes treatment, several key questions remain about GLP-1–induced insulin secretion. Most studies have examined the effects of GLP-1 at concentrations several orders of magnitude higher than those found in vivo; therefore, one might question the physiological (and perhaps even pharmacological) relevance of pathways identified in these studies and whether other important mechanisms might have been obscured. In this issue of the JCI, Shigeto and colleagues demonstrate that physiological GLP-1 does indeed amplify the insulin secretory response. Intriguingly, while much of this response is PKA dependent, as might be expected, the use of picomolar GLP-1 reveals a new and important mechanism that contributes to GLP-1–induced insulin secretion.

Multiple insulinotropic targets of GLP-1 have been implicated by in vitro studies with physiological and supraphysiological GLP-1. 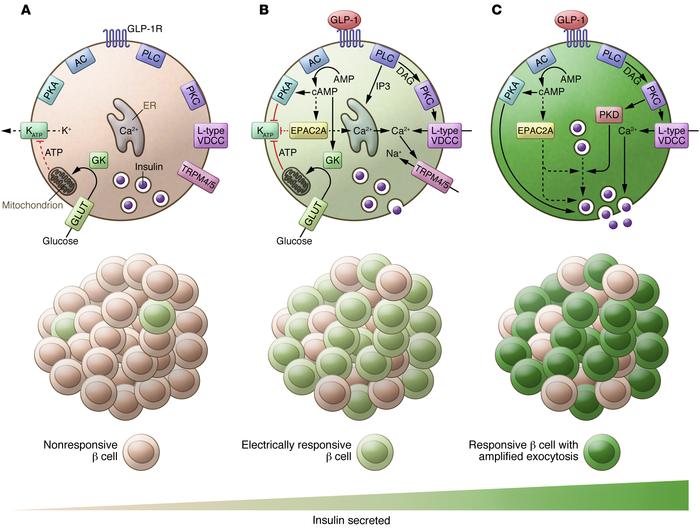 () At or near the threshold concentration (~6 mM) for glucose-stimulated insulin secretion, the glucose-dependent inhibition of KATP channels is only sufficient to trigger electrical and Ca2+ responses in a minority of β cells. () GLP-1 increases the number of responsive β cells through PKA- and PLC-dependent pathways, including the PLC-dependent pathway that activates TRPM4 and TRPM5, as shown by Shigeto et al. (). () Within electrically active β cells, GLP-1 amplifies the amount of insulin secreted by increasing insulin granule recruitment/docking and by enhancing the exocytotic response to Ca2+ through the PKA-dependent phosphorylation of exocytotic proteins and actin remodeling, the latter of which is possibly mediated by PKD. Although Shigeto et al. suggest that cAMP may not rise sufficiently with picomolar amounts of GLP-1 to promote EPAC2A activation, a role for multiple EPAC2A targets cannot be ruled out. Likewise, further work will be required to determine whether the PKA-dependent component is activated (perhaps locally) by picomolar GLP-1 or is permissive for insulin secretion under this condition. AC, adenylyl cyclase; DAG, diacylglycerol; GK, glucokinase; GLUT, glucose transporter; VDCC, voltage-dependent Ca2+ channels.