Most patients who initially respond to treatment with the multi–tyrosine kinase inhibitor sunitinib eventually relapse. Therefore, developing a deeper understanding of the contribution of sunitinib’s numerous targets to the clinical response or to resistance is crucial. Here, we have shown that cancer cells respond to clinically relevant doses of sunitinib by enhancing the stability of the antiapoptotic protein MCL-1 and inducing mTORC1 signaling, thus evoking little cytotoxicity. Inhibition of MCL-1 or mTORC1 signaling sensitized cells to clinically relevant doses of sunitinib in vitro and was synergistic with sunitinib in impairing tumor growth in vivo, indicating that these responses are triggered as prosurvival mechanisms that enable cells to tolerate the cytotoxic effects of sunitinib. Furthermore, higher doses of sunitinib were cytotoxic, triggered a decline in MCL-1 levels, and inhibited mTORC1 signaling. Mechanistically, we determined that sunitinib modulates MCL-1 stability by affecting its proteasomal degradation. Dual modulation of MCL-1 stability at different dose ranges of sunitinib was due to differential effects on ERK and GSK3β activity, and the latter also accounted for dual modulation of mTORC1 activity. Finally, comparison of patient samples prior to and following sunitinib treatment suggested that increases in MCL-1 levels and mTORC1 activity correlate with resistance to sunitinib in patients. 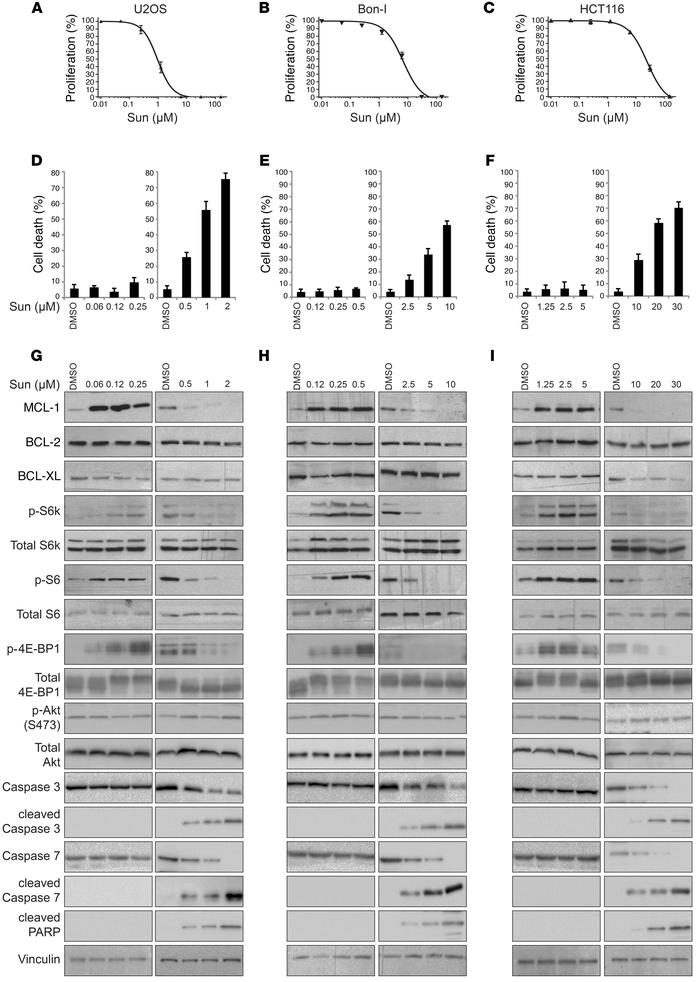