SC-mediated muscle regeneration is impaired in both male and female UTXmKO mice. 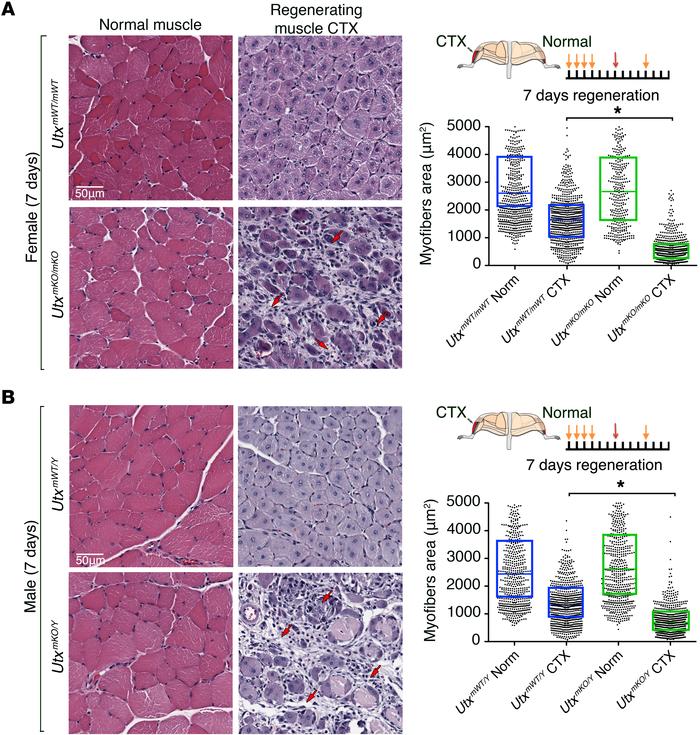 ( and ) Cross sections of TA muscles from female () or male mice () were visualized after H&E staining to evaluate muscle integrity in noninjured (normal muscle) and CTX-injected (regenerating muscle) muscle at 7 days after tissue injury. Necrotic tissues and the infiltrating interstitial cells are indicated by red arrows. Each image panel is visualized under ×20 magnification and represents a total area of 90,000 μm2. A schematic representation of the experimental procedure is shown, with tamoxifen injections indicated by orange arrows and CTX injection by red arrows. Myofiber calibers within the TA muscle of a representative mouse were calculated and plotted for each condition ( > 500 total fibers per condition). Each dot represents the area of a single myofiber; the horizontal bar corresponds to the mean within the 95% confidence interval (box). Statistical significance was determined using an ANOVA test where * < 0.05. Measurements have been performed on a minimum of 9 mice taken from 3 independent experiments.