The selective pressure that drives antigenic changes in influenza viruses is thought to originate from the human immune response. Here, we have characterized the B cell repertoire from a previously vaccinated donor whose serum had reduced neutralizing activity against the recently evolved clade 6B H1N1pdm09 viruses. While the response was markedly polyclonal, 88% of clones failed to recognize clade 6B viruses; however, the ability to neutralize A/USSR/90/1977 influenza, to which the donor would have been exposed in childhood, was retained. In vitro selection of virus variants with representative monoclonal antibodies revealed that a single amino acid replacement at residue K163 in the Sa antigenic site, which is characteristic of the clade 6B viruses, was responsible for resistance to neutralization by multiple monoclonal antibodies and the donor serum. The K163 residue lies in a part of a conserved surface that is common to the hemagglutinins of the 1977 and 2009 H1N1 viruses. Vaccination with the 2009 hemagglutinin induced an antibody response tightly focused on this common surface that is capable of selecting current antigenic drift variants in H1N1pdm09 influenza viruses. Moreover, amino acid replacement at K163 was not highlighted by standard ferret antisera. Human monoclonal antibodies may be a useful adjunct to ferret antisera for detecting antigenic drift in influenza viruses. 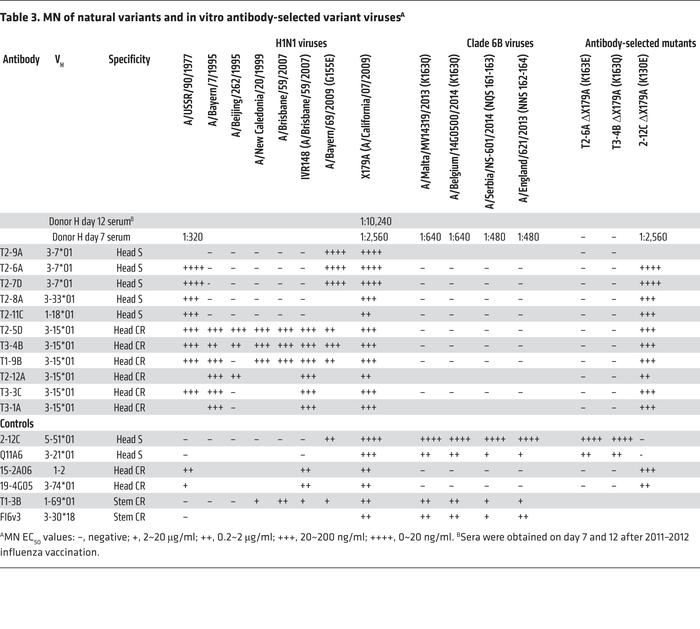 MN of natural variants and in vitro antibody-selected variant virusesA