Emixustat is a visual cycle modulator that has entered clinical trials as a treatment for age-related macular degeneration (AMD). This molecule has been proposed to inhibit the visual cycle isomerase RPE65, thereby slowing regeneration of 11--retinal and reducing production of retinaldehyde condensation byproducts that may be involved in AMD pathology. Previously, we reported that all--retinal (atRAL) is directly cytotoxic and that certain primary amine compounds that transiently sequester atRAL via Schiff base formation ameliorate retinal degeneration. Here, we have shown that emixustat stereoselectively inhibits RPE65 by direct active site binding. However, we detected the presence of emixustat-atRAL Schiff base conjugates, indicating that emixustat also acts as a retinal scavenger, which may contribute to its therapeutic effects. Using agents that lack either RPE65 inhibitory activity or the capacity to sequester atRAL, we assessed the relative importance of these 2 modes of action in protection against retinal phototoxicity in mice. The atRAL sequestrant QEA-B-001-NH2 conferred protection against phototoxicity without inhibiting RPE65, whereas an emixustat derivative incapable of atRAL sequestration was minimally protective, despite direct inhibition of RPE65. These data indicate that atRAL sequestration is an essential mechanism underlying the protective effects of emixustat and related compounds against retinal phototoxicity. Moreover, atRAL sequestration should be considered in the design of next-generation visual cycle modulators.

Impact of treatment with retinoid cycle modulators on the quantity of enlarged photoreceptors in BALB/c mice. 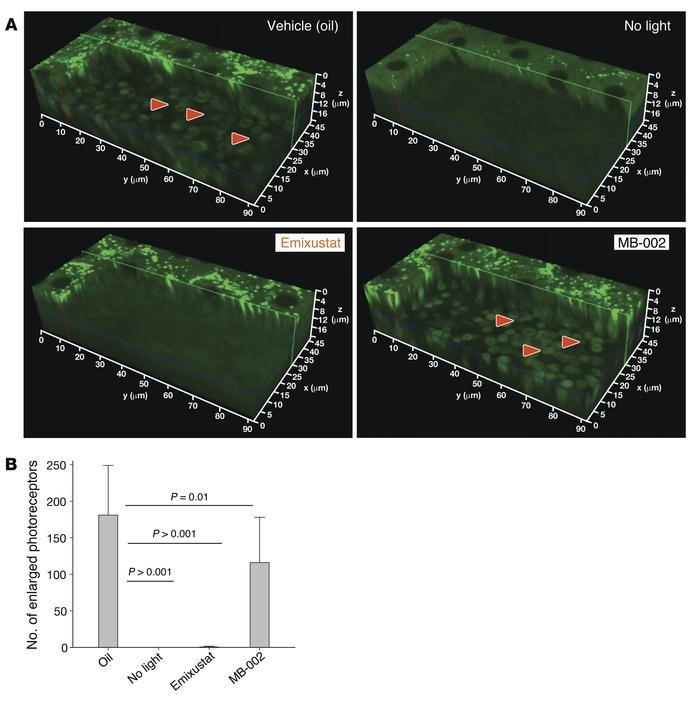 Four- to five-week old male and female BALB/c mice were exposed to bright light at 20,000 lux for 2 hours on the day after they were gavaged with oil (control, 100 μl), emixustat (racemic, 40 mg/kg), or MB-002 (80 mg/kg). TPM images of intact BALB/c mouse eyes were obtained on day 2 after exposure to light, and representative 3D reconstructions for each group are shown in . In each 3D reconstruction, the RPE is at the top, and the section through the photoreceptor cell layer is shown 9–12 μm below the RPE. Treatments are indicated in each image. Enlarged photoreceptor cells, indicated with red arrowheads, were noted only in animals that were exposed to light and treated with oil or MB-002. Enlarged photoreceptor cells were counted for animals in each treatment group (). Error bars indicate SDs; = 8, 5, 8, and 10 for the vehicle, no light–, emixustat-, and MB-002–treated mice, respectively. values shown in the graph were calculated by ANOVA and represent the statistical significance for each treated group versus control animals exposed to light and treated by gavage with oil.