Retinitis pigmentosa (RP) is an inherited photoreceptor degenerative disorder that results in blindness. The disease is often caused by mutations in genes that are specific to rod photoreceptors; however, blindness results from the secondary loss of cones by a still unknown mechanism. Here, we demonstrated that the mammalian target of rapamycin complex 1 (mTORC1) is required to slow the progression of cone death during disease and that constitutive activation of mTORC1 in cones is sufficient to maintain cone function and promote long-term cone survival. Activation of mTORC1 in cones enhanced glucose uptake, retention, and utilization, leading to increased levels of the key metabolite NADPH. Moreover, cone death was delayed in the absence of the NADPH-sensitive cell death protease caspase 2, supporting the contribution of reduced NADPH in promoting cone death. Constitutive activation of mTORC1 preserved cones in 2 mouse models of RP, suggesting that the secondary loss of cones is caused mainly by metabolic deficits and is independent of a specific rod-associated mutation. Together, the results of this study address a longstanding question in the field and suggest that activating mTORC1 in cones has therapeutic potential to prolong vision in RP.

but not is required for loss of -mediated survival. 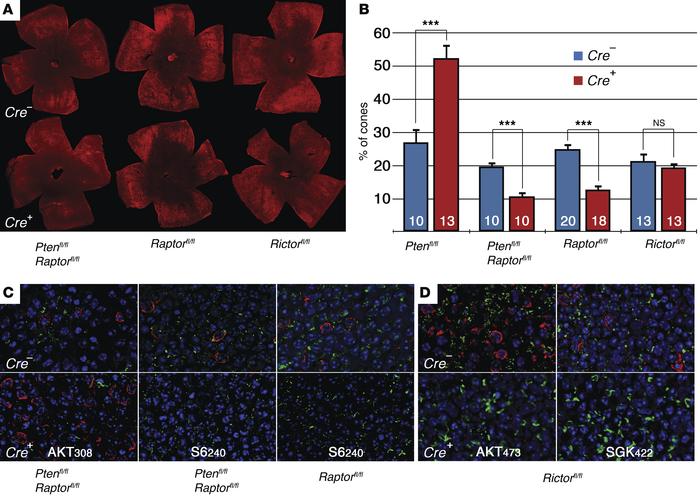