Here, we have described and validated a strategy for monitoring skeletal muscle protein synthesis rates in rodents and humans over days or weeks from blood samples. We based this approach on label incorporation into proteins that are synthesized specifically in skeletal muscle and escape into the circulation. Heavy water labeling combined with sensitive tandem mass spectrometric analysis allowed integrated synthesis rates of proteins in muscle tissue across the proteome to be measured over several weeks. Fractional synthesis rate (FSR) of plasma creatine kinase M-type (CK-M) and carbonic anhydrase 3 (CA-3) in the blood, more than 90% of which is derived from skeletal muscle, correlated closely with FSR of CK-M, CA-3, and other proteins of various ontologies in skeletal muscle tissue in both rodents and humans. Protein synthesis rates across the muscle proteome generally changed in a coordinate manner in response to a sprint interval exercise training regimen in humans and to denervation or clenbuterol treatment in rodents. FSR of plasma CK-M and CA-3 revealed changes and interindividual differences in muscle tissue proteome dynamics. In human subjects, sprint interval training primarily stimulated synthesis of structural and glycolytic proteins. Together, our results indicate that this approach provides a virtual biopsy, sensitively revealing individualized changes in proteome-wide synthesis rates in skeletal muscle without a muscle biopsy. Accordingly, this approach has potential applications for the diagnosis, management, and treatment of muscle disorders. 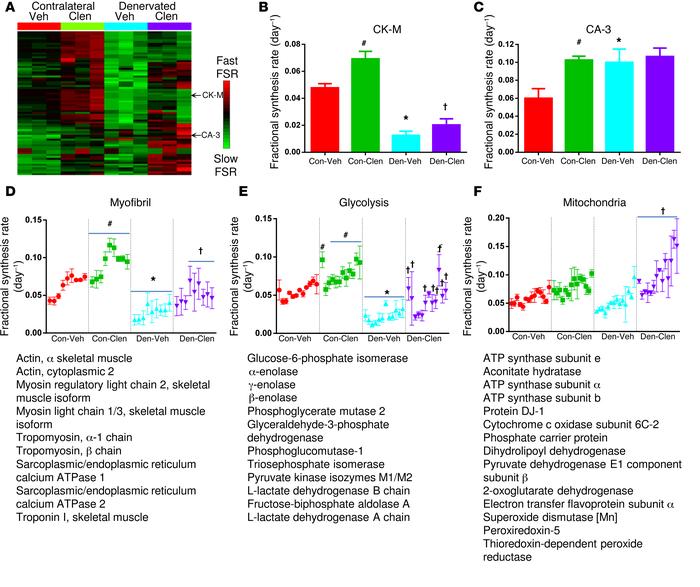