Leishmaniasis is a major tropical disease that can present with cutaneous, mucocutaneous, or visceral manifestation and affects millions of individuals, causing substantial morbidity and mortality in third-world countries. The development of a Th1-adaptive immune response is associated with resistance to developing ( ) infection. Inflammasomes are key components of the innate immune system that contribute to host defense against bacterial and viral pathogens; however, their role in regulating adaptive immunity during infection with protozoan parasites is less studied. Here, we demonstrated that the NLRP3 inflammasome balances Th1/Th2 responses during leishmaniasis. Mice lacking the inflammasome components NLRP3, ASC, or caspase 1 on a -susceptible BALB/c background exhibited defective IL-1β and IL-18 production at the infection site and were resistant to cutaneous infection. Moreover, we determined that production of IL-18 propagates disease in susceptible BALB/c mice by promoting the Th2 cytokine IL-4, and neutralization of IL-18 in these animals reduced titers and footpad swelling. In conclusion, our results indicate that activation of the NLRP3 inflammasome is detrimental during leishmaniasis and suggest that IL-18 neutralization has potential as a therapeutic strategy to treat leishmaniasis patients. 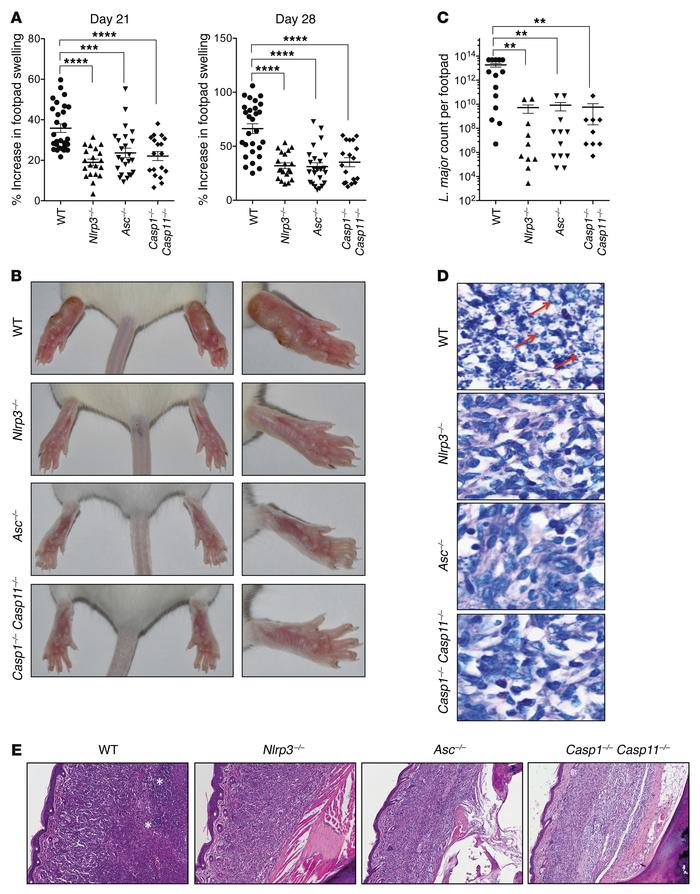