Limiting reductive stress for treating in-stent stenosis: the heart of the matter?

Limiting reductive stress for treating in-stent stenosis: the heart of the matter?

Restenosis after balloon angioplasty and stenting (BAS) remains an unsolved clinical dilemma for patients with coronary artery disease. A better understanding of the mechanisms that drive this phenomenon is likely to lead to more effective treatments. In this issue of the , Ali et al. uncover a critical redox axis with the antioxidant enzyme glutathione peroxidase-1 (GPX1) at its hub and identify potential new therapeutic targets, such as ROS1 tyrosine kinase. This study represents a potential new approach to finding a treatment for BAS, with implications that may extend beyond BAS to other vasculopathies involving vascular remodeling. 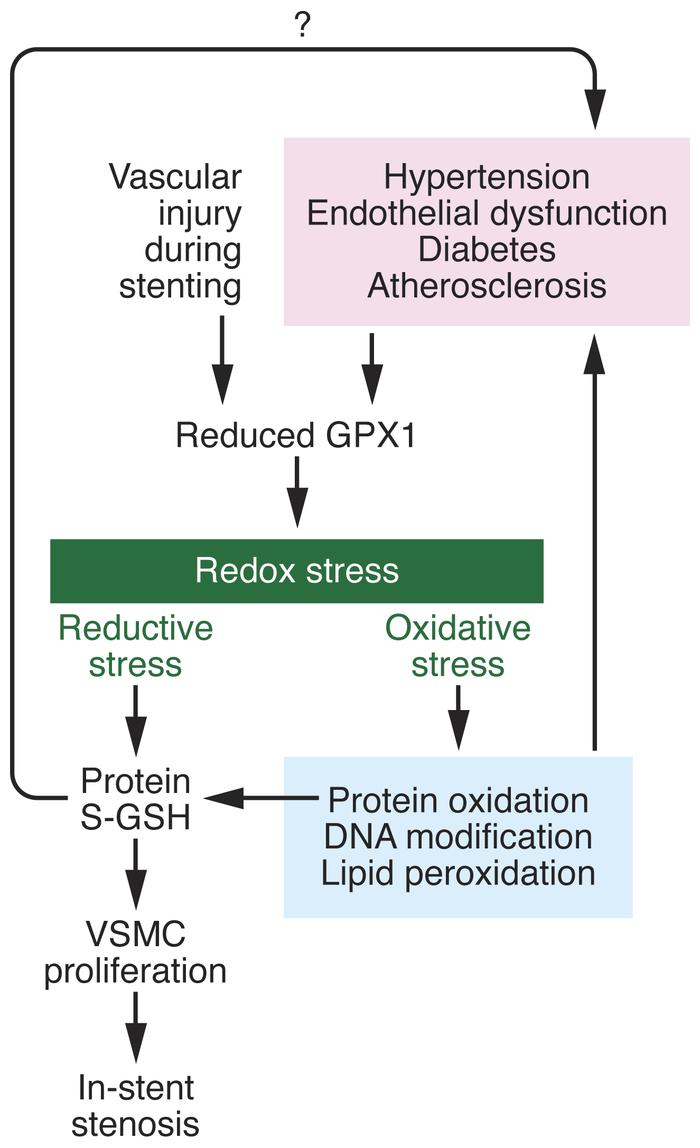 Risk factors for vascular remodeling, such as hypertension, endothelial dysfunction, diabetes, and atherosclerotic plaques, and vascular injury during stenting are associated with reductions in the antioxidant enzyme GPX1. Reductions in GPX1 lead to redox stress, with increases in both reductive stress via GSH and oxidative stress via enhanced production of superoxide (O2.–), hydrogen peroxide (H2O2), and peroxynitrite (OONO–). Reductive stress in turn increases -glutathionylation of key proteins, which in VSMCs, leads to their proliferation, migration, and survival, contributing to in-stent stenosis. Oxidative stress modifies DNA, lipids, and proteins and is known to affect pathways associated with key risk factors (pink box) to exacerbate vasculopathies. It is highly likely that reductive stress via -glutathionylation of important proteins contributes to vascular remodeling associated with these risk factors. In this issue of the , Ali et al. () identify GPX1 as the network hub gene capable of mediating both reductive and oxidative stress in VSMCs. Perturbations in reductive stress may turn out to be as important, if not more important, than oxidative stress, as demonstrated in in-stent stenosis, with clinical implications that may extend beyond BAS.