Respiratory syncytial virus (RSV) is the most common cause of serious viral bronchiolitis in infants, young children, and the elderly. Currently, there is not an FDA-approved vaccine available for RSV, though the mAb palivizumab is licensed to reduce the incidence of RSV disease in premature or at-risk infants. The palivizumab epitope is a well-characterized, approximately 24-aa helix-loop-helix structure on the RSV fusion (F) protein (F254–277). Here, we genetically inserted this epitope and multiple site variants of this epitope within a versatile woodchuck hepadnavirus core–based virus-like particle (WHcAg-VLP) to generate hybrid VLPs that each bears 240 copies of the RSV epitope in a highly immunogenic arrayed format. A challenge of such an epitope-focused approach is that to be effective, the conformational F254–277 epitope must elicit antibodies that recognize the intact virus. A number of hybrid VLPs containing RSV F254–277 were recognized by palivizumab in vitro and elicited high-titer and protective neutralizing antibody in rodents. Together, the results from this proof-of-principle study suggest that the WHcAg-VLP technology may be an applicable approach to eliciting a response to other structural epitopes. 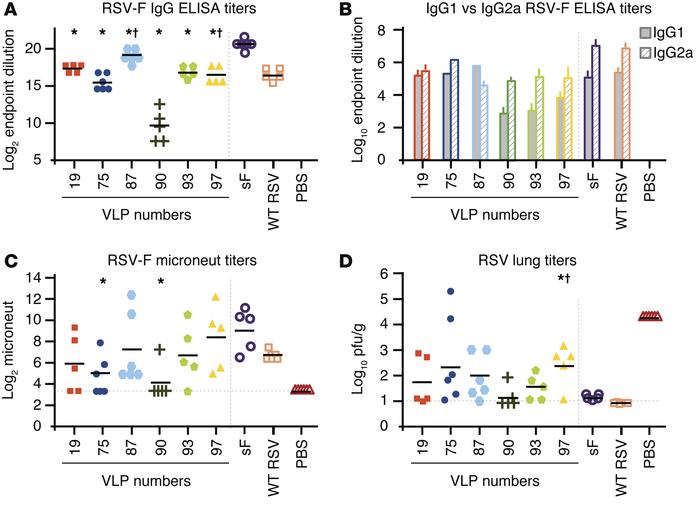 Groups of 5 to 6 BALB/c mice were immunized and boosted with the indicated hybrid VLPs, sF (positive control), infected with WT RSV (positive control), or injected with PBS (negative control). ( and ) Anti-F IgG titers and IgG1/IgG2a isotype titers were determined by ELISA, respectively. () RSV microneutralization titers were determined. () Two weeks after the final bleed, mice were challenged with 106 PFU of WT RSV A2 and lung virus load determined by plaque assay. Mice were immunized with 40 μg RSV-WHcAg VLPs or 0.5 μg sF in GLA-SE. Because the F254–277 insert represents approximately 10% by weight of the VLPs, the functional dose of the F254–277 epitope within each VLP was approximately 4 μg. Comparison with the concurrent sF or WT RSV control groups was determined by 2-tailed Student’s test (homoscedastic) for anti–F IgG titers in , RSV-microneutralization titers in , and protection in . * < 0.05, from sF. † < 0.05 from WT RSV control (full data in ). The sF, WT RSV, and PBS groups are representative of multiple experiments. present the statistically relevant comparisons, which are most notable for VLP-97 in . Excluding VLP-90 from the statistical analysis as discussed in the text, RSV microneutralization titers for the other VLPs correlate with protection ( = –0.48, = 27, = 2.73, and = 0.005). In contrast, RSV F IgG ELISA titers show no statistical correlation with protection ( = –0.13, = 27, = 0.656, and = 0.26). A 1-tailed analysis was used. ≤ 0.05 is considered statistically significant.