Aldosterone stimulates sodium transport in the renal collecting duct by activating the epithelial sodium channel (ENaC). To investigate the basis of this effect, we have developed a novel set of rabbit polyclonal antibodies to the 3 subunits of ENaC and have determined the abundance and distribution of ENaC subunits in the principal cells of the rat renal collecting duct. Elevated circulating aldosterone (due to either dietary NaCl restriction or aldosterone infusion) markedly increased the abundance of αENaC protein without increasing the abundance of the β and γ subunits. Thus, αENaC is selectively induced by aldosterone. In addition, immunofluorescence immunolocalization showed a striking redistribution in ENaC labeling to the apical region of the collecting duct principal cells. Finally, aldosterone induced a shift in molecular weight of γENaC from 85 kDa to 70 kDa, consistent with physiological proteolytic clipping of the extracellular loop as postulated previously. Thus, at the protein level, the response of ENaC to aldosterone stimulation is heterogenous, with both quantitative and qualitative changes that can explain observed increases in ENaC-mediated sodium transport. 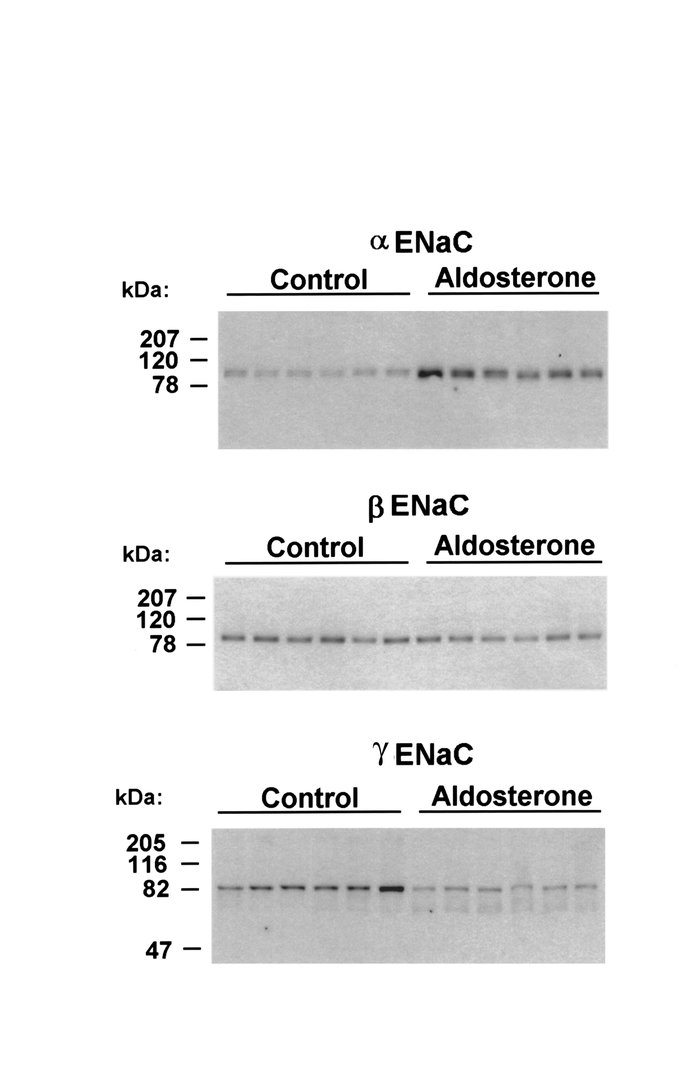 Semiquantitative immunoblots showing effect of aldosterone infusion for 10 days on the abundance and molecular weight of each ENaC subunit in whole kidneys of rat. For each blot, each lane was loaded with 30 μg cortical homogenate from a different rat.