Fat is a vital macronutrient, and its intake is closely monitored by an array of molecular sensors distributed throughout the alimentary canal. In the mouth, dietary fat constituents such as mono- and diunsaturated fatty acids give rise to taste signals that stimulate food intake, in part by enhancing the production of lipid-derived endocannabinoid messengers in the gut. As fat-containing chyme enters the small intestine, it causes the formation of anorexic lipid mediators, such as oleoylethanolamide, which promote satiety. These anatomically and functionally distinct responses may contribute to the homeostatic control and, possibly, the pathological dysregulation of food intake.

Regulation of fat intake by lipid-derived mediators in the gut. 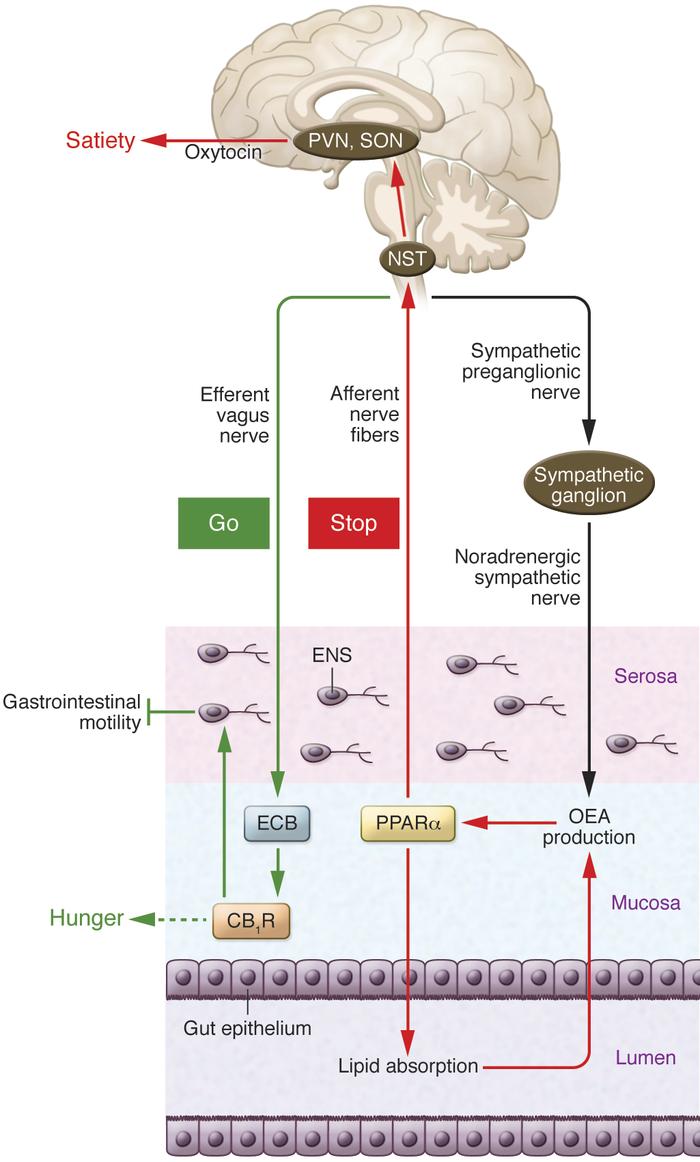 According to this model, oral exposure to fat stimulates endocannabinoid (ECB) mobilization in the jejunum and activation of local CB1 receptors (CB1Rs). This signaling event, which requires the efferent vagus nerve, may act as a “go” signal that promotes further eating (, ). While the precise mechanism underlying this orexigenic response is unknown, the presence of CB1R in cells of the stomach that secrete ghrelin () and in enteroendocrine I cells that release cholecystokinin () suggests a possible involvement of these peptide hormones. Gut CB1Rs also control gastrointestinal motility (, , , ) and mucosal inflammation (). When fat-containing chyme reaches the upper intestine, it initiates the production of several lipid-derived mediators, including OEA, a process that depends on sympathetic activation of β2 adrenoreceptors (, ). OEA stimulation of PPARα may act as a “stop” signal for feeding by recruiting afferent sensory fibers, possibly of the vagal nerve (, , ). The signal is transferred to the NST in the brainstem, from which neurotransmission continues to magnocellular oxytocin-secreting neurons in the paraventricular (PVN) and supraoptic nucleus (SON) of the hypothalamus (, ), as well as to histaminergic neurons of the tuberomammillary nucleus (). ENS, enteric nervous system.