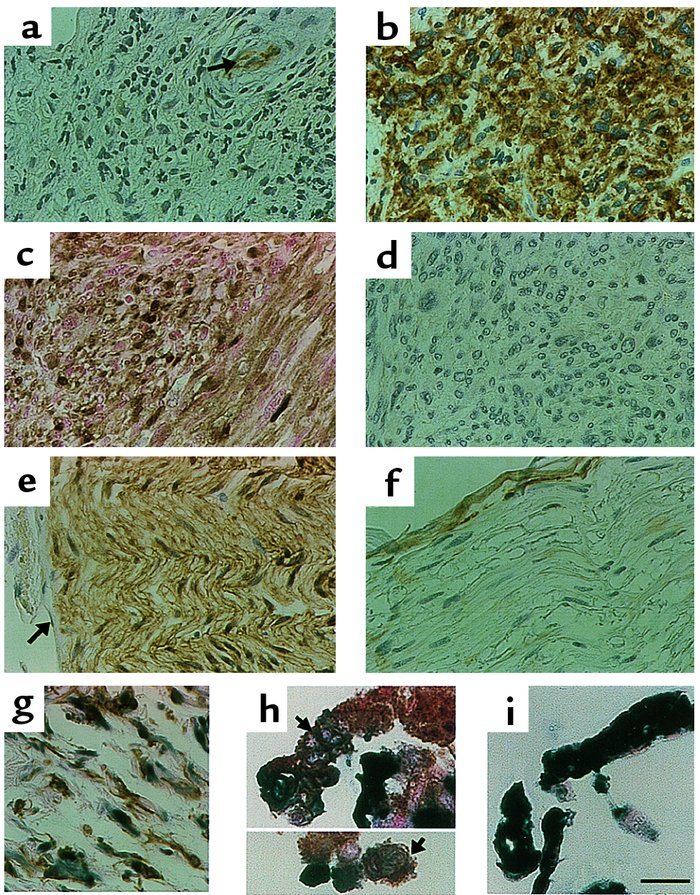 EGF-R expression in NF1 tumor sections. Paraffin sections were stained with anti–EGF-R (, , and ) or anti-S100 (, , and ) or with both antibodies (, , and ). Visualization of single antibodies was with 3′3-diaminobenzidine HCl (DAB; brown) (–). Double labeling used nitroblue tetrazolium (NBT/BCIP; blue) for anti-S100, and DAB (brown) for anti–EGF-R (–). In , , and –, the counterstain is hematoxylin (blue); in and –, the counterstain is nuclear fast red (pink). (–) Sections from MPNST. In , the arrow points to a normal nerve within the tumor, containing S100+ cells, whereas the tumor matrix is S100–. An adjacent section from the same tumor in shows that most cells are EGF-R+. Another MPNST contains S100+ cells () and is mostly negative for EGF-R (). ( and ) Sections of normal human nerve (arrow points to perineurium). () A section of a cutaneous neurofibroma with EGF-R+/S100+ cells. () A section from a dissociated neurofibroma cell preparation. The arrow designates a group of cells double stained by anti-S100 and anti–EGF-R. () A section from a dissociated normal nerve preparation. No double-labeled cells are detected. –, bar: 34.2 μm; and , bar: 16.3 μm.