Spermatogenesis is a complex, multistep process that maintains male fertility and is sustained by rare germline stem cells. Spermatogenic progression begins with spermatogonia, populations of which express distinct markers. The identity of the spermatogonial stem cell population in the undisturbed testis is controversial due to a lack of reliable and specific markers. Here we identified the transcription factor PAX7 as a specific marker of a rare subpopulation of Asingle spermatogonia in mice. PAX7+ cells were present in the testis at birth. Compared with the adult testis, PAX7+ cells constituted a much higher percentage of neonatal germ cells. Lineage tracing in healthy adult mice revealed that PAX7+ spermatogonia self-maintained and produced expanding clones that gave rise to mature spermatozoa. Interestingly, in mice subjected to chemotherapy and radiotherapy, both of which damage the vast majority of germ cells and can result in sterility, PAX7+ spermatogonia selectively survived, and their subsequent expansion contributed to the recovery of spermatogenesis. Finally, PAX7+ spermatogonia were present in the testes of a diverse set of mammals. Our data indicate that the PAX7+ subset of Asingle spermatogonia functions as robust testis stem cells that maintain fertility in normal spermatogenesis in healthy mice and mediate recovery after severe germline injury, such as occurs after cancer therapy. 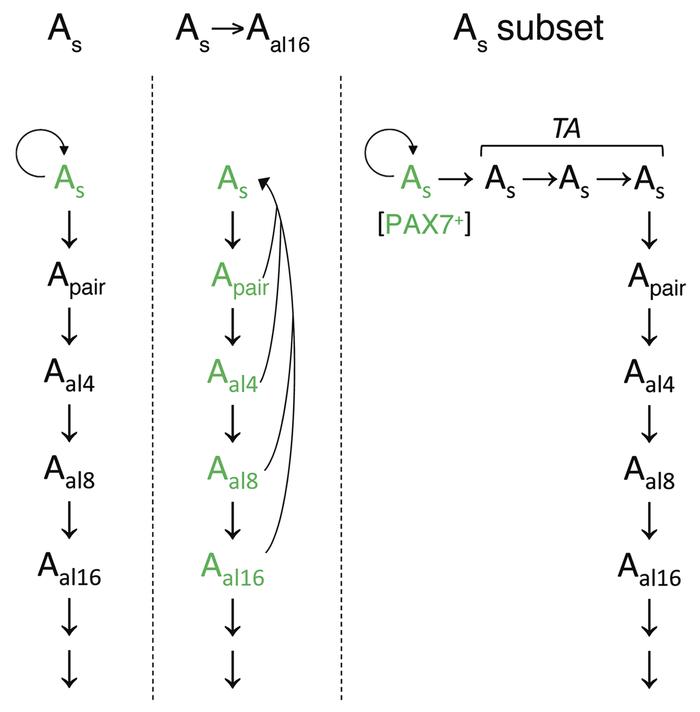