Pituitary adenylate cyclase activating polypeptide (PACAP) is present in gastric nerves, and PACAP receptors (PAC1) are found on gastric enterochromaffin-like (ECL) cells. Expression of PAC1 splice variants in purified ECL cells was determined by RT-PCR. PACAP effects on ECL cells were analyzed by video imaging of [Ca2+]i and histamine release; its effects on gastric glands were examined by confocal microscopy of [Ca2+]i in ECL and parietal cells. PACAP action on D cells was measured by [Ca2+]i and radioimmunoassay. PACAP effects on acid secretion were determined in fistula rats with or without neutralizing anti-somatostatin antibodies. All splice variants of PAC1 were found, but vasoactive intestinal polypeptide (VIP) receptor (VPAC) products were absent. PACAP-27 and -38 dose-dependently raise [Ca2+]i in ECL cells, and stimulated histamine release. VIP had a much lower affinity, which demonstrates the presence of PAC1 but not VPAC. PACAP elevated [Ca2+]i in ECL and parietal cells of superfused gastric glands, but only the parietal cell signal was inhibited by ranitidine, showing the absence of PAC1 on parietal cells, and demonstrating functional coupling between the cell types. PACAP and VIP stimulated calcium signaling and somatostatin release from D cells with almost equal efficacy. Acid secretion was stimulated after intravenous injection of PACAP into rats treated with somatostatin antibody. PACAP is a candidate as a mediator of neural regulation of acid secretion. 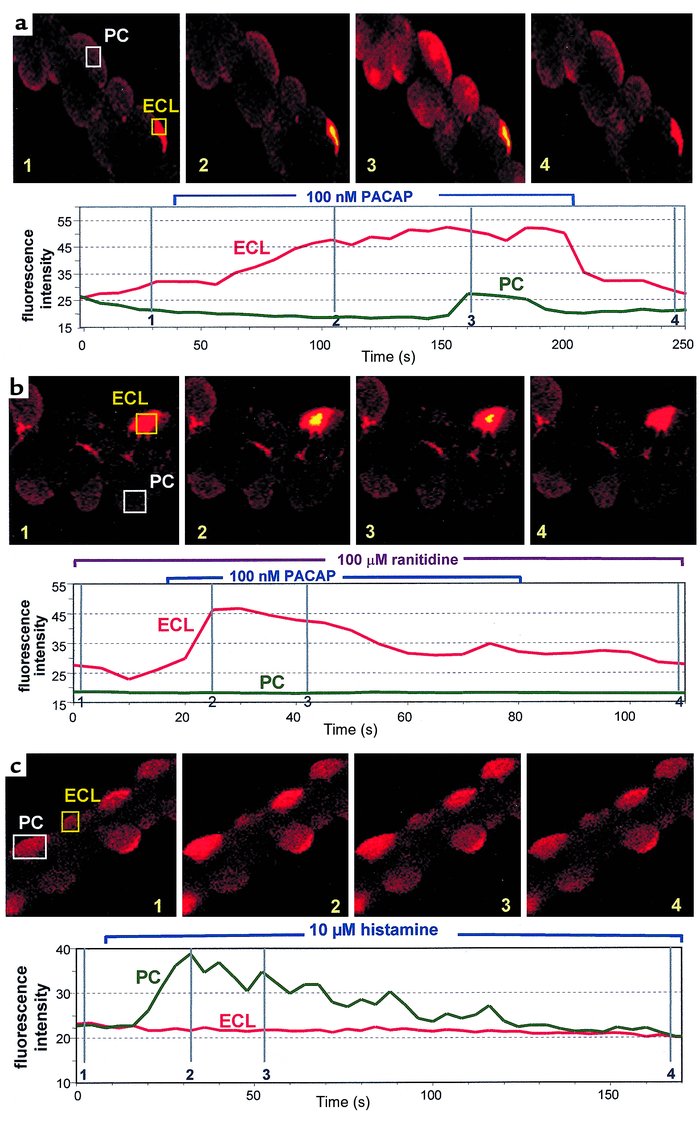 Effect of PACAP and histamine on superfused Fluo-4–loaded gastric glands using confocal microscopy. () In the first sequence, PACAP-38 (100 nM) was added to the perfusate; it can be seen that first the ECL cell [Ca2+]i and then the parietal cell [Ca2+]i is elevated. The position of the images on the trace for [Ca2+]i is presented on the image and in the vertical lines in the lower trace, which shows the calcium level throughout the experiment. The rectangular images represent the regions of the total image that were chosen to generate the scan of the calcium signal. () 100 μM ranitidine was added to the perfusate before PACAP addition; although the ECL cell response is retained, the parietal cell response is abolished, as shown in the images and in the trace for [Ca2+]i. () Effect of 10 μM histamine on parietal cells [Ca2+]i. The lower panel shows the calcium signal in a parietal cell. No changes were observed in ECL cells with this ligand. Images are representative of at least 4 separate experiments, carried out on different preparations.